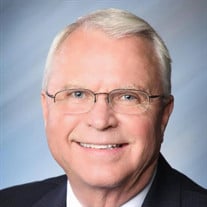 William “Bill” Mack of Kenner, Louisiana passed away on December 23, 2020 at the age of 72 surrounded by his loving family. He was a beloved husband, father, brother, grandfather, friend and more, and his memory will live on in the hearts of his loved ones. Bill was born in St. Louis, Missouri on December 14, 1948 to William and Rose Joyzat Mack. He and his younger brother Paul were close growing up and remained so for the rest of Bill’s life. Bill attended McCluer High School. Heplayed baseball throughout childhood and high school and continued to play soft ball as an adult. He remained an avid St. Louis Cardinals fan his whole life. Bill was also on the swim team in high school. When Bill was in high school, he had a summer job welding on the Gateway Arch in St. Louis, and he was always proud of his contribution to the famous monument. Bill graduated high school in 1967. He attended college then went to work for Southwestern Bell Telephone Company. Bill met the love of his life, Diane Poppe in St. Louis. In May of 1972, they were married. In the years that followed, they had two sons, Brennan and Cory. Bill continued his career in the Telecom industry and in 1980, a job with Southwest Utilities relocated the family to the New Orleans area where he lived for the rest of his life. In 1983, Bill sold his boat to start his own Telecom company, First Communications Company. With Bill’s hard work, determination and skills as a salesman along with Diane’s help managing the accounting, First Communications became a remarkably successful company and is still a family run business today. Bill and Diane loved to travel, and they took Brennan and Cory on many memorable trips as boys. When the boys were grown, Bill and Diane continued to travel and particularly loved spending time at their place near Ashville, North Carolina. They also traveled often to Houston to visit Brennan’s family and across the country to visit numerous friends and other family members. Bill loved fishing, golfing, and aviation. He obtained his private pilot’s license so that he too could fly a plane along with his pilot sons. Bill and Diane enjoyed spending time with their grandchildren together. Bill especially loved swimming with his grandchildren and using his swim team experience to help the grandkids improve their skills. Bill was fun loving and lived his life to the fullest. His boisterous laugh was contagious, and his sense of humor always ensured there was plenty of laughter. Bill is preceded in death by his parents, along with his sister Carol Guibor and her husband Warren. Loved ones that will miss Bill until they meet again are his treasured wife of forty-eight years, Diane; son Brennan and his wife Becky; son Cory Mack and his wife Jennifer; grandchildren Christian, Brea, Miley and Beau; brother Paul and wife Debbie along with nieces, nephews, numerous other family members and friends. It was Bill’s wish to not make a fuss upon his passing, and the family will celebrate his life in a private memorial considering the current circumstances with the pandemic. If you are so inclined, please lift a glass in Bill’s honor, maybe one of his favorite drinks a bloody Mary or whiskey sour and think of a fond memory of him. Bill would have wanted it that way. In lieu of flowers, please donate to the charity of your choice in memory of Bill.

William &#8220;Bill&#8221; Mack of Kenner, Louisiana passed away on December 23, 2020 at the age of 72 surrounded by his loving family. He was a beloved husband, father, brother, grandfather, friend and more, and his memory will live on in... View Obituary & Service Information

The family of William "Bill" Mack created this Life Tributes page to make it easy to share your memories.

William “Bill” Mack of Kenner, Louisiana passed away on December...