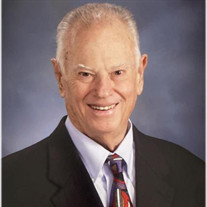 Wilfred “Bill” John Vosberg, Jr., a devoted husband, father, grandfather and friend of many, passed away Sunday, December 12, 2021 at the age of 80 in New Orleans, La. He was preceded in death by his parents, Wilfred “Bill” John Vosberg, Sr. and Estelle Rita Jourdan Vosberg, and his parents in-law, Lawrence “Papa” Charles Grundmann, Sr. and Marguerite “Mere” Eugenie Tinker Grundmann. Bill is survived by his beloved wife of 61 years, Marguerite “Margot” Grundmann Vosberg; and loving children, Wilfred “Billy” John Vosberg, III, Lawrence “David” Vosberg (Monica), Stacey V. Marsalone (Michael), Laura V. Massey (Michael), Steven “Michael” Vosberg (Brandi); adoring grandchildren, Matthew Charles, Megan Elizabeth and Madeline Elise Marsalone, Jakob Devon and Sarah Olivia Massey, Stella Lena and Sylvia Louise Vosberg. Also survived by his brothers and sisters in-law, Lawrence Charles Grundmann (Kathy) and Susan G. Fortier (Frank), many nieces and nephews. Bill was born on April 18,1941 in New Orleans, Louisiana. He attended St. Dominic School and Jesuit High School (Class of 1959). He received his BS in Business from Loyola University in 1963 and was a proud member of Sigma Alpha Kappa Fraternity. Bill began working in the family business, Automotive Clutch & Brake Co., when he was 13 years old and continued through high school. Upon graduation from Loyola, Bill continued to work for the family business expanding operations and eventually becoming President of the company upon his father’s retirement. In addition, he served as President of the Louisiana Automotive Wholesalers Association. Bill belonged to the Knights of Columbus, was a devoted Catholic and supported the Southern Dominican Province and St. Jude Children’s Research Hospital. He also volunteered his time and talents at Tulane Catholic Center where his wife worked for 28 years. He was a member of the Southern Yacht Club for over 60 years, was an avid sailor and raced in the Dragon & Easterly 30 classes. Bill enjoyed family vacations, playing golf, and hunting and fishing with his buddies at their Reggio camp. In recent years he enjoyed many beautiful weeks on the beach in Pensacola, FL. On any given day you could find him in the kitchen cooking for family, friends and guests. Bill was an excellent chef and loved to entertain at dinner parties. He was endlessly experimenting and developing new recipes which were enjoyed by all, especially while watching Saints or LSU football games. The simple pleasures in life brought great joy to Bill. His most cherished times were those spent with his family. He was very proud of all of his children and grandchildren and their accomplishments. He traded college, hunting and fishing stories with the boys and talked soccer, parties and school with the girls. Always ready with words of advice. He will be remembered as a loving, considerate, generous, funny, intelligent and a strong man by all who knew him. Friends and relatives are invited to attend the Funeral at St. Dominic Catholic Church, 775 Harrison Avenue, New Orleans, LA, 70124 on Monday, December 20, 2021 for visitation 10-12PM and concluding with Mass at noon. The funeral will be live-streamed on St. Dominic Parish website: www.stdominicparish.com for those who are unable to attend. In lieu of flowers, please consider a donation to your favorite charity in his memory. To share memories or condolences, please visit www.muhleisen.com

The family of Wilfred "Bill" John Vosberg, Jr. created this Life Tributes page to make it easy to share your memories.