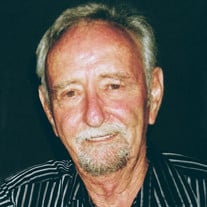 Warren Allen Perez, Sr. (WAP) March 3, 1944 - August 19, 2017 Warren Allen Perez, Sr. or "WAP" as he was affectionately known to almost everyone, passed away peacefully on Saturday, August 19, 2017 with his family surrounding him. Warren was 73 years old. He was preceded in death by his maternal grandmother, Elsie F. Baker, his father, Warren Edward Perez and his brother, Wesley V. Perez, Sr. Warren is survived by his devoted and loving wife, Linda Laine Perez, his mother, Evelyn B. Perez, his siblings, Beverly Pentney (Hugh), David Perez (Kathy), and Eloise Terry (Gene), his children Warren (Allen) Perez, Jr. (Dawne), Chrissie Lauricella (Leo), and Susan Perez (Butch), and his step children Denise Burdette (Chip) and Keith Bordelon (Christina). Also, his grandson Cameryn Perez, who was like a son to him. He had eight grandchildren, five great grandchildren and five step grandchildren. Warren was a kind hearted man who loved his family and enjoyed spending time with his grandchildren. He was known for his kindness, generosity and caring heart. He loved traveling when he could and would talk about all the places he would like to see. He enjoyed designing and building projects and took great pride in being known as a jack-of-all-trades. Relatives and friends are invited to attend a Memorial Service at the House of Refuge Assembly of God Church, 1561 E. LA Hwy 46, Toca, LA 70085 (1 mile on the left once turned on Hwy 46, Judge Perez Extension in Poydras) on Friday, September 1, 2017 at 2:00 p.m. Visitation from 12:00 p.m. - 2:00 p.m.

The family of Warren "WAP" Allen Perez, Sr. created this Life Tributes page to make it easy to share your memories.