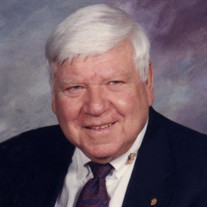 Thomas F. Guidry passed away peacefully on Wednesday, October 18, 2017. Born to Ernest J. and Pauline Badeaux Guidry of Gramercy, LA on June 21, 1923. He was preceded in death by his beloved wife, Shirley Ruppert Guidry; his son, Gerard R. (Jerry) Guidry; his grandson, Kristian F. Guidry; his parents, Ernest J. Guidry and Pauline Badeaux Guidry; his sisters, Beatrice and Rita; and his brothers, EJ and Maurice. He is survived by his son, Thomas F. Guidry, Jr (Jean); his daughter, Judith A Guidry; his daughter-in-law, Susan F. Guidry; his grandsons, Gerard (Jay) R. Guidry (Lannie), Thomas F. (Tad) Guidry III; a granddaughter, Laurel G. DuPont (Shane); great-grandchildren, Grayson C. and Parker J. Guidry, Benett T., Juliette B. and Porter Rex DuPont; and a niece Rose P (Winkie) Jensen. Also survived by many other family, friends, nieces and nephews. Tom moved to Metairie after graduating from Lutcher H.S. He got a job at a lumber company thru which he met his future wife. He was drafted into the USAF, but before being deployed, he got married. He proudly served during WWII. After returning to Metairie, he started building cabinets. Then he went into business for himself as a custom made woodworker. He was more concerned about satisfying his customers than he was making a profit. He was scoutmaster for Boy Scout Troop 117. He thoroughly enjoyed teaching the young boys skills and values they would need in life. Had fun taking them camping, hiking and other outings. When he semi-retired in 1978, he moved to Kentwood, LA. He became a member of the Dominican laity, St. Mary's Association, an Extraordinary Minister and joined the Knights of Columbus. He belonged to Fr. Della Penta Assembly 2228 in Independence, LA. His positions included Grand Knight, past Grand Knight, Trustee, Faithful Navigator, & Faithful Admiral. He was instrumental in the establishing the program of displaying the American Flag on Patriotic Days. He also participated in the Headstart Program in Independence. He played Santa for the many poor children until the age of 91. He loved seeing the smiling faces of the youngsters. It brought him great joy. Relatives and friends are invited to attend the Funeral Mass at St. Christopher the Martyr Catholic Church, 309 Manson, Metairie, LA on Monday, October 23, 2017 at 12:00 p.m. Visitation at the church from 10:30 a.m. to 12:00 p.m. Interment in Cypress Grove Cemetery. In lieu of flowers, masses preferred. Arrangements by L. A. Muhleisen & Son Funeral Home.

The family of Thomas Francis Guidry created this Life Tributes page to make it easy to share your memories.