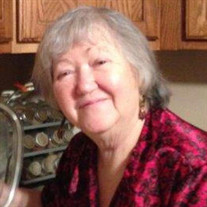 Theresa Heltz Thiele, a native of New Orleans, LA and a resident of Kenner for over 45 years passed away on November 22, 2016 at the age of 77. Beloved wife of the late Benedict (Bennie) Thiele, Jr. for 58 years. Mother of Karen Thiele Holland (Michael), Gerard Thiele Sr. (Dorie Finnegan), Daniel Thiele (Michelle Saucier) Ronald Thiele Sr., Benedict Thiele III (Marie Pecot) and Gregory Thiele. Daughter of the late Leonard A. Heltz, Jr. and Therese Bourgeois Heltz. She will be dearly missed by her family including 16 grandchildren and 38 great-grandchildren. Survived by her sisters Julia Kass (Larry), Gail Heltz, Virgie Oswald (Ray) and preceded in death by her two brothers Stephen Heltz and Leonard Heltz, III. Sister-in-law of Alfred Thiele, Sr. (Barbara), Alida Kuebler, Lana Anderson, Edwin Anderson, Sue Anderson Watkins, Ralph Fox, the late Dr. John Thiele, Sr. (Patricia), Michael Thiele, Susan T. McCarthy, Joni T. Rockwell, Jane T. Anderson. Theresa attended St Francis of Assisi school where she made her communion, confirmation and later married the love of her life in 1958. She graduated from Fortier High School class of 1958. She was a member of the Women's auxiliary of the Knights of Columbus Council 6736 where she enjoyed many activities with friends of the Men's and Women's auxiliary clubs for many years. She was a devoted and loving Mom, Grandma and Great-Grandmama. She was the matriarch of our family opening her home to her children and grandchildren rarely leaving a moment for herself. She was always giving of herself from coaching volleyball in her young adult years to volunteering at nursing home Bingo in latter years. She loved watching football and baseball and always has been a Tulane die hard fan. Relatives and friends of the family are invited to attend the Funeral Mass in the Chapel of L. A. Muhleisen & Son Funeral Home, 2607 Williams Blvd., Kenner on Friday, November 25, 2016 at 10:30 AM. Visitation from 8:30 AM until time of service. A Graveside Service will be held on Monday, November 28, 2016 at 11:00 AM in Metairie Cemetery, New Orleans. In lieu of flowers, blood donations to Ochsner Blood Bank, donations to Canon Hospice and Meals on Wheels appreciated.

Theresa Heltz Thiele, a native of New Orleans, LA and a resident of Kenner for over 45 years passed away on November 22, 2016 at the age of 77. Beloved wife of the late Benedict (Bennie) Thiele, Jr. for 58 years. Mother of Karen Thiele Holland... View Obituary & Service Information

The family of Theresa Heltz Thiele created this Life Tributes page to make it easy to share your memories.

Theresa Heltz Thiele, a native of New Orleans, LA and a resident...