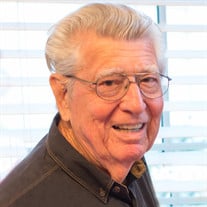 Theodore Peter Miestchovich passed away on Monday, March 13, 2017 in a tragic automobile accident while out delivering one of his well known handmade wooden crosses. He was 88, a native of New Orleans, LA and a resident of Destrehan. Beloved husband of the late Constance Mae ‘Connie’ Miestchovich. Father of Joseph Miestchovich (Nana), Gina Scott (James) and Kenneth Miestchovich (Lisa). Son of the late Walter J. Miestchovich and Marie Koch Miestchovich. Grandfather of Melissa, Joseph, Keith, Samantha, Kyle and Owen. Great-grandfather of Ashley, Rachel, Stephen, Justin, Slayden and Gavin. Also survived by many nieces and nephews. Theo was a graduate of Francis T. Nicholls High School. Upon graduation he immediately went to work at the New Orleans Public Belt Railroad. He worked as a machinist for 45 years and was a member of the International Association of Machinists. When his son was old enough to play ball, Theo decided to start coaching as a second job. He was hired by the City of New Orleans and spent the next 26 years at both the Saint Roch and Kenilworth playgrounds coaching basketball, baseball, football and track for the New Orleans Recreation Department. What started as a simple coaching position at St. Roch led him to years of accomplishments, wins, and eventually the position of supervisor of the playground. In 1967, Theo moved to New Orleans East and was instrumental in developing Kenilworth park and bringing NORD programing to that playground. In his role as a coach he touched the lives of so many young men and was like a foster father to many. Throughout his life, one of Theo’s hobbies was woodworking and he was known by many as “the cross man” for his meticulous work in making wooden crosses for friends and strangers. He could bring light and happiness into peoples day be it a chance meeting or a planned one. On his last day, we can only be lifted from the darkness of this tragedy with the knowledge that Paw Paw was delivering one last cross to an old friend. Theo was always very active. He rode his bike every morning without fail. He was an avid gardener, loved to hunt, fish and crawfish at his family camp in Hopedale. He loved to square dance with his beautiful wife Connie, traveling the south with square dancing groups. He and Connie made wonderful friends in the dancing partners. He will be sadly missed by these friends, those he mentored and coached and mostly by his loving family who will miss him everyday. His smile was infectious, his hugs made you feel welcome and loved, and he easily shed a tear.... this sweet man will not soon be forgotten. Relatives and friends are invited to attend the funeral. A Funeral Mass will be celebrated at St. Charles Borromeo Catholic Church, 13396 River Road, Destrehan, LA on Friday, March 17, 2017 at 1:00 p.m. Visitation at the church from 11:00 a.m until 1:00 p.m. Interment in St. Charles Borromeo Cemetery. Arrangements by L.A. Muhleisen & Son Funeral Home.

Theodore Peter Miestchovich passed away on Monday, March 13, 2017 in a tragic automobile accident while out delivering one of his well known handmade wooden crosses. He was 88, a native of New Orleans, LA and a resident of Destrehan. Beloved... View Obituary & Service Information

The family of Theodore Peter Miestchovish created this Life Tributes page to make it easy to share your memories.