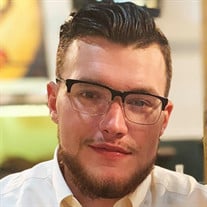 On February 20th, 2022 Stephan Grey “Bubby” Osbourn was reunited with his lord and savior. Devoted father of his only son, Kross. Beloved son of Jessica Lauer and John Osbourn. Loving grandson to Jack Lauer, DellMara Lovell and Cathy Osbourn. Preceded in death by his grandmother, Alva Lauer “MawZee” and grandfather, Weston Osbourn. Nephew of Gretchen Lauer Berger and Andrew Berger, and Robert, David and Philip Osbourn. Godchild of Eileen Corkern. Loving brother of Savannah Osbourn. Cousins whom he loved dearly, Brynn, Rex, Ariel, Gary, Tia, Cooper, William, Jonathan, Sean, Autumn, Mia, Josh, Richard, Dannielle, Stephen, William, Jo and Ray Ryan, Reed and so many others. Best friend of Albert Turley and Joshua Bataglia (Christine). Stephan was known for his deep devotion to family, friends and animals, he leaves behind his dog Biggie whom he rescued from deaths door and loved beyond measure. He was passionate about fishing, video games, cars and most of all helping all those who were in need. He never met a stranger and his smile was contagious. He was his mothers best friend and closest companion. Our entire world changed this day and we will never be the same again. His future was bright and he was a light to so many. He loved unconditionally and in return was cherished by all he touched. He never stopped trying to do better and in his darkest hours turned to all who loved him dearly. It is with inconceivable sadness we announce his departure from this world. But it also with joyful hearts that we believe he is with Jesus and his MawZee and all of his many friends who’ve gone before him. We ask that all who struggle know they’re not alone and to seek help and support. Relatives and friends are invited to attend the Visitation and Funeral Service at L. A. Muhleisen & Son Funeral Home, 2607 Williams Blvd., Kenner on Wednesday, March 2, 2022. Visitation from 2:00 p.m. to 4:00 p.m. followed by a Funeral Service at 4:00 p.m.

The family of Stephan Grey "Bubby" Osbourn created this Life Tributes page to make it easy to share your memories.