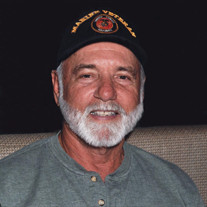 Sidney “Honey Bunny” John Gonzales Jr. was called home by God, his father on Tuesday, August 20, 2019 at the age of 73. He was a native of New Orleans and a resident of Kenner for 44 years. He departed from this world surrounded by his loving family and entered into eternal life. He is survived by his beloved wife of 49 wonderful and exciting years, Sharon H. Gonzales, as well as his daughter, Sherri G. Ford, and son, Sidney J. Gonzales III, (Laura). His grandchildren: David M. Ford III, Dax M. Ford, Sidney J. Gonzales IV, Austin J. Gonzales, Dustin M. Ford, Denten M. Ford, Shealyn K. Ford and Kylie E. Gonzales. He is also survived by his brother, Robert “Bobby” Gonzales as well as nieces and nephews and a host of friends. Sidney was preceded in death by his father, Sidney J. Gonzales Sr. and mother, Thelma Werling Gonzales, and his sister Betty G. Guillory who will be receiving him into his eternal life with open arms. Sidney graduated from Warren Easton in 1964 and joined the service “Marine Corp” in 1964 to 1967 “active duty” and reserve until 1970 where he was release with an Honorable discharge. In 1970 he married the Love of his life, Sharon. They shared many years of riding motorcycles, hunting, “okay bwana”, and experienced a very full and happy life together. When blessed with his children, his love could not be measured. His life became centered on loving and protecting Sherri and Sidney, and instilling his faith and love of life and country while providing his family with all they needed. They spent and enjoyed many happy experiences from birth to present. Pawpaw Turkey as he was known to his grandchildren was a terrific Pawpaw. He shared his love of life, his faith and love of country with them. When not sharing his love of hunting and fishing with them he could be found cheering them on and supporting them in school, sports and endeavors. It was important to him to share with them his deep faith and always wanted them to believe that they could achieve anything in their lives, while keeping the utmost respect for themselves and people they loved. It is not good bye, but until we meet again and here the words “What’s up Dude.” Relatives and friends are invited to attend the visitation at Vineyard Church of New Orleans, 4340 Sal Lentini Pkwy., Kenner, LA 70064, on Saturday, August 24, 2019 from 9:30 a.m. to 12:00 p.m. followed by a Memorial Service at 12:00 p.m. To share memories or condolences visit www.muhleisen.com

Sidney &#8220;Honey Bunny&#8221; John Gonzales Jr. was called home by God, his father on Tuesday, August 20, 2019 at the age of 73. He was a native of New Orleans and a resident of Kenner for 44 years. He departed from this world surrounded... View Obituary & Service Information

The family of Sidney "Honey Bunny" John Gonzales, Jr. created this Life Tributes page to make it easy to share your memories.