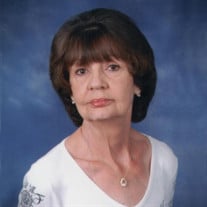 Paulina---Funeral services for Shirley Mary Eckerle-Soleto (formerly Shirley Cannatella), 75, of Paulina, who died peacefully at her home on Saturday, January 30, 2021, will be held on Thursday, February 4, 2021, at L.A. Muhleisen & Son Funeral Home, 2607 Williams Blvd., in Kenner, LA. Visitation is from 9:30 a.m. to 11:00 a.m., followed by mass.Shirley was born on May 19,1945, in New Orleans, LA, to Walter & Norma Eckerle. She was raised in New Orleans and graduated from Alcee Fortier High School in 1963. Shirley was a faithful worker at Ascension of Our Lord Church in LaPlace for over 30 years. She was a devout Catholic and, in addition to attending weekly mass, she spent an hour each week in the Adoration Chapel with the Blessed Sacrament. Her loving and peaceful demeanor can be attributed to her strong faith in God. She loved bowling, listening to Elvis records, and playing video poker, but, more than anything, she loved spending time with her children, her grandchildren, her great grandchildren and her friends. Shirley was happiest surrounded by those she loved. She was a true friend who always cared about others. Shirley is survived by her four children: Joseph Cannatella, Kevin Cannatella (Cecile Cannatella Simoneaux), Lisa (Mark) Cannatella Stein, and Brian (Shelley) Cannatella; eight grandchildren: Ryan, Ashley, TJ, Taylor, Brooke, Savannah, Isabella, and Briley; and three great grandchildren: Brody, Norah, Wyatt and one on the way. She is also survived by three siblings: Carol (Charles) Gibert, Walter (late Shirlene) Eckerle, Jr., and Gaynell (late Owen) Ockman. Shirley is preceded in death by her parents and her former husband, Joseph S. Cannatella, Jr. Shirley lived a life fitting to God in her service to others. Online condolences may be sent to the family at www.muhleisen.com

The family of Shirley Mary Eckerle-Soleto created this Life Tributes page to make it easy to share your memories.