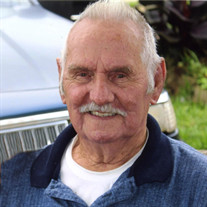 Russell Anthony Toups, Sr. passed away on Friday, September 23, 2016 at the age of 88. He was a native of Houma and a resident of Kenner. Russell proudly served in the U.S. Army. Beloved husband of the late Frances Boyer Toups. Father of... View Obituary & Service Information

The family of Russell Anthony Toups, Sr. created this Life Tributes page to make it easy to share your memories.