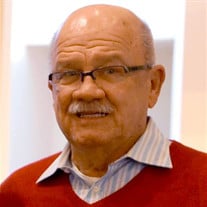 Roy Joseph Thibodaux, Jr. August 28, 1947 - February 6, 2016 Roy Joseph Thibodaux, Jr., of New Orleans, passed away suddenly on Saturday, February 6, 2016. Born in Franklin, Louisiana, Roy resided in Kenner with his family for many years before relocating to Houston for work. Recently, he moved back to Louisiana and has since been in New Orleans close to his family. Roy was a graduate of the University of Southwestern Louisiana, earning a B.A. in History and a Master's in Education. He sold industrial gases in the Southeastern United States for many years, most recently for Air Liquide. Roy had a true zest for life. His many interests included reading, studying history, traveling, and visiting museums. He was an avid New Orleans Saints fan and attend the franchise's first home game as a young man. He loved spending time with his family and friends, particularly as "PawPaw" to his beloved grandson, Edwin. Roy is survived by his mother, Florence Winston Thibodaux, of Franklin, Louisiana. His father, Roy J. Thibodaux, Sr., predeceased him. Also surviving are his son Roy "Jay", and his wife, Jennifer; his daughter, Jennie Thibodaux Glisson, and her husband, James, along with their son, Edwin; his sister, Marguerite O'Quinn, and her husband, Pat; his sister Rosemary "Penny" Thibodaux; his sister Kay Lorenzo, and her husband, Michael; his former wife and forever friend, Phyllis Thibodaux; his longtime friends, Darlene Scelfo, Andrew Durant and Richard Williams; as well as many nieces and nephews. Visitation will be at L.A. Muhleisen & Son Funeral Home, 2607 Williams Boulevard, Kenner 70062, on Thursday morning, February 11, 2016 from 11:00 a.m. to 1:00 p.m. A short memorial service will follow at 1:00 p.m. In lieu of flowers, donations to American Diabetes Association would be greatly appreciated.

The family of Roy Joseph Thibodaux, Jr. created this Life Tributes page to make it easy to share your memories.