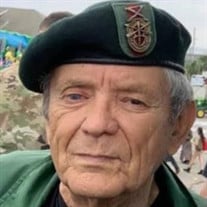 Lt. Col. Robert Gordon “Bob” Moreau (retired), a native of New Orleans and a resident of Kenner, died on Monday, Feb. 14, 2022, of complications from COVID-19. He died at Ochsner Medical Center in Kenner, LA. His sons, Kevin and Keith, were at his side. Bob was born on Dec. 11, 1935 to Forest and Jessie Moreau in New Orleans, and was affectionately known as “Rookie” by his siblings. After graduating from Destrehan High School, he enlisted in the U.S. Army on June 7, 1955, serving for three years before his honorable discharge in May of 1958. He later served in the National Guard and then with the Army Reserve. In his civilian life, he was an accountant and comptroller, working at auto dealerships across the New Orleans area. In his later years, he was an active member of Special Forces Association Chapter 30, where he served as Treasurer and devoted much of his time to the chapter’s program providing active-duty military veterans with the opportunity to ride in a Mardi Gras parade. He married Joan Alewine in 1965, and was blessed with two sons, Kevin Forest Moreau and Keith Edwin Moreau. In 1983 he married Judith (Judi) Ayo, with whom he was still happily married at the time of his passing. Bob is remembered fondly by those who knew him as straightforward and compassionate, a devoted husband, father, grandfather and caregiver, and a veteran who was passionate about his military service, especially his time as a paratrooper. He was a true larger-than-life character, and no one who met him was ever likely to forget him. Bob is preceded in death by his siblings Pearl, Edward, Katy, Joy Ann and Eugene. He is survived by his wife, Judith; his sons Kevin (April) and Keith; his stepchildren Wendy (Krieg) Sibille, Christopher (Missy) Neumann and Keith (Claire) Neumann; his grandchildren Ryan Moreau, Alex (Dayanara) Moreau, Lauren, Lindsay and Jonathan Sibille, and Jake, Camille, Cole and Cara Neumann; his brothers John and David; and many cousins, nieces and nephews. Relatives and friends are invited to attend the visitation at L.A. Muhleisen & Son Funeral Home, 2607 Williams Blvd., Kenner, LA., on Friday, February 18th, 2022 from 5:00 p.m. to 8:00 p.m., and on Saturday, February 19th, 2022 from 9:00 a.m. to 11:00 a.m. A funeral service will immediately follow the visitation. Interment in St. Roch Cemetery #2, New Orleans, LA. To share memories or condolences, please visit www.muhleisen.com.

The family of Lt. Col. Robert Gordon "Bob" Moreau created this Life Tributes page to make it easy to share your memories.