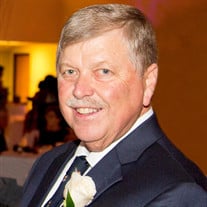 Richard Lewis Clay Sr., age 70, beloved husband, father and grandfather passed away peacefully at home with his family at his side on Friday, July 8, 2016 after a battle with cancer. He was a dedicated husband and father. He is preceded in death by his parents, Wilton Lewis Clay and Marian Mouledoux Clay. He is survived by his loving wife of 46 years, Sharon Williams Clay, and his 3 children: Richard (Amy) Clay Jr., Christine (William) Shackelford and Jeffrey Clay. He was "Gramps" to 6 grandchildren: Mason and Jackson Haro, Izabella, Lucinda and Finley Clay and the future Stella Shackelford. He is survived by 7 brothers and sisters: Barbara (the late Roger) Dallam, Carolyn (Torger) Brown, Marilyn (William) Cresson, Cathleen (James) Pfifer, David (Bonnie) Clay Sr., Robert Clay and Chris (Debra) Clay. He is also survived by a host of relatives, friends and the Heavy Rollers Running Team. He was born and raised in New Orleans. He was a graduate of Cor Jesu (Brother Martin) and received a BS from LSU School of Engineering. As a 1st Lieutenant in the United States Air Force, he was stationed in Baudette, MN, with the Air Defense Command, NORAD. He worked as a senior mechanical engineer for DuPont and American Cyanamid (Cytec) for over 30 years. He came out of retirement 3 times to help rebuild the new plant. He enjoyed gardening, where everyday he would bring in his fresh vegetables for Sharon to cook. And finally, his love for his Heavy Rollers Running Team. He enjoyed the friendships and camaraderie that go beyond what words can say. Special thanks to Dr. Laura Brinz and her wonderful staff and to the Guardian Angel Hospice, especially the nurses who all gave great care to Richard. Relatives and friends of the family are invited to attend the Funeral Mass at St. Dominic Catholic Church, 775 Harrison Ave. on Friday, July 15, 2016 at 12 noon. Visitation will be held from 10:00 a.m. to 12:00 noon. Private interment will be held at a later date. In lieu of flowers, the family requests donations to any cancer charity of your choice. Arrangements by L. A. Muhleisen & Son Funeral Home.

Richard Lewis Clay Sr., age 70, beloved husband, father and grandfather passed away peacefully at home with his family at his side on Friday, July 8, 2016 after a battle with cancer. He was a dedicated husband and father. He is preceded in... View Obituary & Service Information

The family of Richard Lewis Clay,, Sr. created this Life Tributes page to make it easy to share your memories.