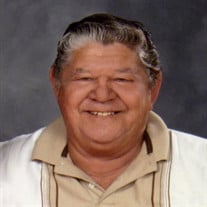 Randolph &#8220;Randy&#8221; Humphries, Sr. passed away on Tuesday, August 23, 2016. He was 75, a native of Pineville, LA and a resident of Franklinton, LA. Randy was a veteran of U.S. Army Reserve and retired from Avondale Shipyard after... View Obituary & Service Information

The family of Randolph "Randy" Humphries, Sr. created this Life Tributes page to make it easy to share your memories.