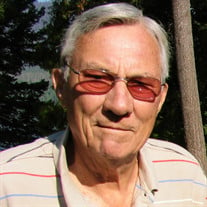 Phillip Baxter Grose, Sr. passed away in his sleep on August 16, 2018, at the Southeast Louisiana Veterans Home in Reserve. He was 90. Phil leaves behind his daughter Marlene Grose Crusta (David) of Columbia Falls, Montana, five grandchildren, Jared Crusta (Stepheny) of Caldwell, Idaho, Janice Villnerve (Paul) of Palmer, Alaska, Kyle Crusta (Trista) of Covington, Louisiana, Mallory Crusta of Columbia Falls, Montana, and Eileen Crusta of Columbia Falls, Montana, and 16 great-grandchildren. He was preceded in death by his wife Adele Barbara Amthor Grose who died in 2013 in Bull Shoals, Arkansas, and his son Phillip Baxter Grose, Jr. who died in 2016, also in Bull Shoals. Phillip was born on November 21, 1927, in Rutherfordton, North Carolina to the late Claude Virgil Grose, Sr. and Nellie Ethelinda Callahan. Phil grew up in rural North Carolina with his four siblings, CV, Margaret, Mary, and Hoyle. All preceded him in death. In his youth, Phil liked exploring the mountains of North Carolina. At Spindale High School, he excelled in athletics where he played baseball, tennis, and was a strong swimmer. At 17, he joined the Navy, and later the Air Force to see the world. Morocco and the Alps made fond and lasting memories for him. His military service began in 1945 and ended when he was honorably discharged in 1953. Phillip was a good dancer and while in the Air Force he met Adele, who also loved to dance. They were destined to jitterbug together and were married in 1954. They were married for 59 years. Phil and his family lived in the New Orleans area most of his life. A favorite pastime was reading western novels and books of historical significance. Phil enjoyed his part-time job tending bar at Juan’s in Chalmette, Louisiana where his friends nicknamed him Indian because he looked like a Cherokee. Phillip was a sociable guy and if he wasn’t watching a Saint’s game, he might be found teeing off at Louis Prima’s Golf Course or having a beer at a crawfish boil. In 2005, Hurricane Katrina displaced him, his wife, and his son to Bull Shoals, Arkansas, where they settled into a new home. He appreciated small town life and having biscuits for breakfast at a local diner. After his wife and son died, he chose to return to the New Orleans area in 2016 where he lived out the remainder of his life. Phil was a man of few words. He was known for his sense of humor and easy-going disposition. He always said, “I can’t complain.” Phillip outlived all of his siblings and in-laws of his generation on both sides of his family with the exception of his sister-in-law, Margaret “Jody” Revels Grose (Hoyle). She is the last man standing. Phil is also survived by a host of nieces and nephews. Cremation was held in Kenner, Louisiana. Perhaps at your next gathering, you can raise your glasses and make a toast to Phil.

Phillip Baxter Grose, Sr. passed away in his sleep on August 16, 2018, at the Southeast Louisiana Veterans Home in Reserve. He was 90. Phil leaves behind his daughter Marlene Grose Crusta (David) of Columbia Falls, Montana, five grandchildren,... View Obituary & Service Information

The family of Phillip Baxter Grose, Sr. created this Life Tributes page to make it easy to share your memories.

Phillip Baxter Grose, Sr. passed away in his sleep on August...