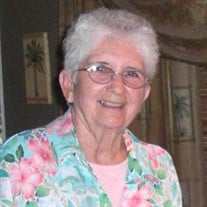 Peggy Perry Whiddon passed away at East Jefferson General Hospital on Wednesday, May 29, 2019 at 5:30 p.m. from complications of medicine administered for Stroke. She was 79 years old when she died. She was born in Water Valley, KY on March... View Obituary & Service Information

The family of Peggy Perry Whiddon created this Life Tributes page to make it easy to share your memories.