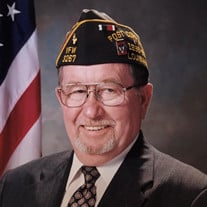 Paul Elisha Davis of Harahan, Louisiana passed away peacefully surrounded by family in his home of 68 years on the afternoon of Wednesday, March 3, 2021. A native of Franklin County, Mississippi, Paul was born on November 18, 1929. He served... View Obituary & Service Information

The family of Paul Elisha Davis created this Life Tributes page to make it easy to share your memories.