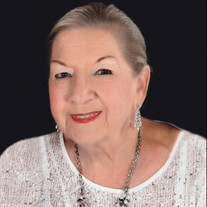 Pansy Lou Harp Solberg passed away on Wednesday, June 20, 2018. She was born on January 8, 1943 in Delta, AL at her grandmother’s home. The family moved to New Orleans in 1953, later moved to River Ridge, LA where she resided since 1976. Pansy excelled in her chosen profession at a time where advancement was very hard for a woman. She started her insurance career at PIAL, spending the majority of her years at Marsh McClennan as an Ocean Marine Claims Manager and Senior Client Advisor, VP. She was with Marsh for 33 years. She was the first female member of The Mariners Club and also served a term as President of the club. In addition, she worked at Ellsworth and Arthur J. Gallagher. Pansy had a passion for spending time with family & friends, gardening, entertaining, cooking, traveling, shopping, and a little casino time. Her life was dedicated to her family and career. She was the best mother, sister, aunt, and friend, but most of all she was the greatest grandmother. She never met a stranger and all that knew her, loved her. She was most proud of being mumsey to her grandchildren and to so many others. There was no limit to Pansy’s love, wit, compassion and giving nature. Pansy was the beloved wife of the late Wayne Norris by 2nd marriage. Loving Mother of Michelle Lambert. Grandmother of Addison Garsaud, Wyatt Lambert and Samantha Lambert. Daughter of the late Lois Irene Stephens Harp and Marvin Lee Harp. Sister of Martha Harp and Jerry Harp (wife, Linda who was like a sister). Aunt of Melissa Harp Fenwick (husband, Scott) and the late Jason Harp. She is also survived by her husband's children, whom she loved dearly, Michelle Vath, Melissa Norris and Angie Dillenkoffer (husband, Terry); six grandchildren; five great-grandchildren; and four great nieces and nephews. Special thanks to Dr. St. John, who took such great care of Pansy and the wonderful doctors and nursing staff at Ochsner Hospital CCU, Jefferson, LA. Relatives and friends are invited to attend the visitation at L. A. Muhleisen & Son Funeral Home, 2607 Williams Blvd., Kenner on Wednesday, June 27, 2018 from 4:00 p.m. to 7:30 p.m. followed by a Memorial Service at 7:30 p.m. Final resting place will be at Liberty Church of Christ Cemetery, Lineville, AL.

The family of Pansy Lou Harp Solberg created this Life Tributes page to make it easy to share your memories.