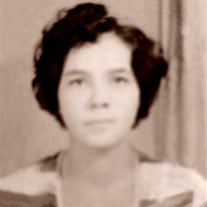 Nellie Cooper 1930-2017, age 87, passed away peacefully on Thursday, May 25, 2017 at her home in Harahan, LA. She was born on April 24, 1930 in Honduras, Central America to the late Muriel Bodden and John Ebanks. She was married to Wilbur... View Obituary & Service Information

The family of Nellie Cooper created this Life Tributes page to make it easy to share your memories.