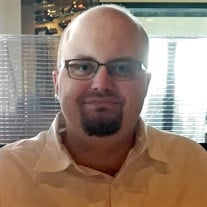 It is with heavy hearts that we announce the passing of Narven William Osteen on Sunday, July 5, 2020 at the age of 35. He was a native of Libby, MT and a resident of Kenner, LA. Narven was born on June 27, 1985 to Narven Osteen and Nola Bjordahl in Libby, Montana where he lived until he left for college at Montana Tech, in Butte, Montana. While there, Narven studied Environmental engineering, completing his degree in 2007. Growing up in Montana Narven enjoyed raising chickens and growing a garden with his father. Hobbies he had hoped to pass on to his daughter. After college, Narven began his career with Schlumberger Oil Field services. He was transferred to the New Orleans lab, and while living in New Orleans met his wife, Amanda (Fitch) Osteen. The two moved to Montana together in 2009, and while living there Narven spent a short time working overseas for Schlumberger in Equatorial Guinea, Turkey, and Romania. The two enjoyed biking, hiking and camping during his weeks home. Narven and Amanda were married June 25, 2011 on the beach in Oscoda, Michigan while he was home from his overseas work. Shortly after, he relocated back to New Orleans to continue working in the New Orleans Lab. In 2013, Narven welcomed the birth of his daughter, Evelyn. Evelyn quickly became the center of Narven’s universe. He enjoyed playing board games most recently teaching Evelyn to play Chess, the two also loved riding bikes, walking their dog Aspen and playing in the back yard. Narven was truly Evelyn’s Super Dad. He was truly gentle and loving with both Amanda and Evelyn every day, in every way. In 2018, Narven had re-discovered a past passion by joining a bowling league where he bowled every Saturday evening until the league was paused due to the restrictions and mandates brought on by the Corona Virus. Narven found laughter and comradery in the two years with his league mates. Narven was, hands down, the best husband and father anyone could ask for. He had a heart of gold, a kind and giving spirit, and an unflappable personality. Anyone who knew Narven knew that he was truly special. Narven will be missed by all he leaves behind. His life ended far too soon, and the hole he leaves behind will forever be felt. Narven is survived by his wife, Amanda Osteen and daughter, Evelyn Osteen of Kenner; Mother, Nola (Frazey) Bjordahl of Yuma, AZ; Brother, Mark (Leslie) Osteen of Baltimore, MD; Sisters, Nancy (Hib) Matter of Libby, MT, and Alexandria Osteen Thatcher, AZ; Mother-in-law, Peggy English of Oscoda, MI; Father-in-law, John Fitch of Perry, GA; and Brother-in-law, Mathew Fitch, of Bucyrus, OH. He is also survived by numerous aunts, uncles, and cousins across the United States. Relatives and friends are invited to attend the visitation at L. A. Muhleisen & Son Funeral Home, 2607 Williams Blvd., Kenner on Saturday, July 11, 2020 from 2:30 p.m. to 4:00 p.m. followed by a Memorial Service at 4:00 p.m. In keeping with President Cynthia Lee Sheng’s Executive Order, you are required to wear a mask to enter this facility. If you are unable to attend, please share memories, photos or condolences at www.muhleisen.com In lieu of flowers, donations can be made to the memorial fund for his daughter’s future educational expenses.

It is with heavy hearts that we announce the passing of Narven William Osteen on Sunday, July 5, 2020 at the age of 35. He was a native of Libby, MT and a resident of Kenner, LA. Narven was born on June 27, 1985 to Narven Osteen and Nola Bjordahl... View Obituary & Service Information

The family of Narven William Osteen created this Life Tributes page to make it easy to share your memories.

It is with heavy hearts that we announce the passing of Narven...