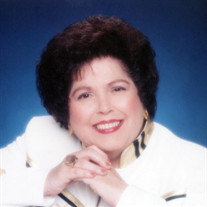 Melvina “Baba” Manno Otillio, born July 15, 1932, a beloved mother, daughter, sister, aunt, friend and co-worker met God after a long and full life on March 31, 2019. Wife of the late Charles R. Otillio, Jr. Loving mother of Joseph P. Otillio (wife, Julie) and the late Charles R. Otillio, III. Grandmother of Corrin Otillio, Amanda Otillio and Mitchell Otillio. Daughter of the late Joseph Peter Manno and Malvina Sansone Manno. Sister of the late Mary Fos. Also survived by several cherished nieces, nephews and cousins. Melvina was a devout Catholic. For most of her life Melvina lived in New Orleans next door to her beloved sister, Mary Fos, and family where she was a parishioner of the St. Louis Cathedral until relocating to St. Rose where she attended mass at St. Charles Borromeo Church in Destrehan, LA. While living in St. Charles Parish, she was a regular participant in the Nifty Fifties Club and Ladies Red Hat Society. Melvina knew all her blessings came to her through her faith in God. Melvina had a charitable spirit and did not meet a sponsorship opportunity that she did not like. Melvina could always put a smile on your face. Her sense of humor was always at the forefront of her life. Melvina was known for loving every day, no matter how big or small and it showed inside and out. She was always fashion ready with a full ensemble including a matching outfit, jewelry, purse, shoes and makeup. Melvina was an excellent chef. She knew how to cook authentic Italian cuisine and would never let you leave her home hungry. If you sat at her dinner table, she would tell you “mangi.” To know Melvina was to love her (and maybe even help her with a favor or two). Melvina was a woman of great artistic abilities. She played the piano, designed clothes for herself and granddaughters, created beautiful wreathes and loved to decorate her home. Honoring her commitment as Annunciation High School Junior and Senior Class President, Melvina also wrote her graduating class of 1951 yearly newsletter for nearly 70 years. Melvina was a hard-working woman. She enjoyed working in many aspects of the life insurance industry. Melvina was proud to become a member of the National Organization of Life Underwriters. Melvina’s family members have wonderful memories of her. She was bold, unique and full of southern charm. Her personality was captivating and Melvina made friends wherever she went. Melvina was her son, Joe’s biggest fan. She adored him and continues to cheer him on from heaven. She will be missed by all that have known her. Relatives and friends are invited to attend the visitation at L. A. Muhleisen & Son Funeral Home, 2607 Williams Blvd., Kenner on Friday, April 5, 2019 from 9:00 a.m. to 11:00 a.m. followed by a Funeral Mass at 11:00 a.m. Interment in St. Louis Cemetery No. 3.

The family of Melvina "Baba" Manno Otillio created this Life Tributes page to make it easy to share your memories.