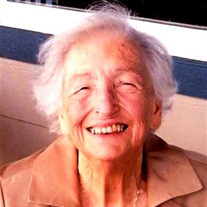 Mary Elizabeth (Mimi) McConnell Sherrouse was born October 2, 1924, in Monroe, LA, returning at 14 with her family to their hometown of New Orleans. She passed away April 11, 2018, in New Orleans. Preceded in death by her beloved husband, John Walton Sherrouse, Jr, her parents, Suzanne Bringier and Samuel Logan McConnell, two children, Leigh Walton Sherrouse and Trista S Neilson, brother, Trist McConnell (Helen), sisters, Myrthé Byrne (Jack) and Stella Faris (Warren), a grandson and a nephew. She is survived by her children. Victoria, Peter (Sally), Stella (Bill Schramm), Charles and Mark, 11 grandchildren, 9 great-grandchildren and numerous nieces and nephews. Mimi graduated from Sophie B. Wright and Newcomb College where she majored in Sociology and was a member of Chi Omega sorority. She graduated a year early, in 1944, to join the WASPs, first getting her radio certification and solo pilot’s license. When the WASP program closed as her class was called up, she was heart-broken but determined to help the war effort, going instead to Chicago to work in an airplane factory. In Chicago, she met an old friend from New Orleans stationed there, Walton Sherrouse. They married July 12, 1947, at Christ Church Cathedral.Mimi worked in service-oriented positions throughout her life from early stints at the Red Cross and original Ochsner Clinic, to later positions as Program and Volunteer Director at the YWCA and Volunteer Coordinator at East Jefferson Hospital. She was both a professional and strong personal advocate for volunteerism.Mimi moved to Waveland, MS, in 1984 and retired 2 years later. After Katrina’s total destruction there, she determined to return from a 9-month displacement to rebuild, saying she wanted to help her community come back. Mimi volunteered with a local church helping others recover, living over 5 years in temporary housing while waiting for her own house. Her new home was built a few months after her 86th birthday. The undergirding of Mimi’s life was her faith in God through Jesus Christ as her Lord and Savior. She believed in Jesus as a small child in Sunday School at First Presbyterian of Monroe where a family friend took her and her older brother each week. Mimi never wavered in her deeply held “knowing,” as she put it, sowing seeds of faith in her children and persevering during challenging times. She disdained pretense and prejudice, instilling these values by example in her family and those who knew her well. In middle-age, she began deepening her understanding of Scripture through classes with Trinity Christian Community, where she also worked and volunteered, and later with Bible Study Fellowship. She attended BSF classes over 30 years, until ill-health prevented a few months before her death. For funeral arrangements, she long requested a simple wood casket, “no eulogies – only Jesus,” the hymn, Immortal, Invisible, God Only Wise, and for the Hallelujah Chorus from Handel’s Messiah to be played, which was played also at her wedding. The family would like to thank her long-time doctors, Leonard Glade, Anthony Lama, and Sudhanva Wadgaonkar of Touro Infirmary and their staffs for their superlative, devoted and compassionate care throughout Mimi’s last decades. Relatives and friends are invited to attend the Funeral Service at Christ Church Cathedral Chapel, 2919 St. Charles Ave., New Orleans on Friday, April 20, 2018 at 1:30 p.m. followed by a burial in Lafayette Cemetery No. 1. In lieu of flowers, please kindly consider donations to Mimi’s favorite ministry, Zion’s Hope, PO Box 783369, Winter Garden, FL, 34778-3369, or to the charity of your choice. Arrangements by L. A. Muhleisen & Son Funeral Home.

Mary Elizabeth (Mimi) McConnell Sherrouse was born October 2, 1924, in Monroe, LA, returning at 14 with her family to their hometown of New Orleans. She passed away April 11, 2018, in New Orleans. Preceded in death by her beloved husband, John... View Obituary & Service Information

The family of Mary Elizabeth (Mimi) McConnell Sherrouse created this Life Tributes page to make it easy to share your memories.