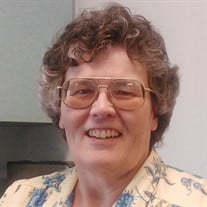 Marianne Raley was born July 16, 1956 in Kansas City, Kansas and passed away while in resident at Carpenter House Hospice during the early morning hours of January 19, 2016 after a short but intense cancer diagnosis. During her childhood years, her family relocated several times, Lincoln, NE and McLeans, VA, but ultimately, home was Overland Park, Kansas. Once locating to Overland Park from Kansas City, KS, she attended Osage and Valley View Elementary Schools, Nallwood Junior High, and graduated from Shawnee Mission South with the Class of 1974. During her school years she was activity involved in musical groups and theater productions with one of her proudest accomplishments being her participation in Shawnee Mission South's ACappella Choir, under the direction of Dr. Don Donalson. Also, during these years, she became a very accomplished bowler. She not only competed locally and nationally, but passed on her talent for this sport as a youth coach at the King Louie West and Ranchmart Bowling Lanes. In 1976, Marianne relocated to Metairie, LA and began establishing her adult career in the customer service profession. Her career path included tenure at companies such as Battestella Seafood Company, Centerplate at the New Orleans Super Dome, Whitney Bank (now Hancock) and culminating with Gulf Coast Bank and Trust Company. She continued her love of competitive bowling at Paradise Lanes, Metairie, LA, both in league and in national tournaments and was a member of the Krewe of Diana for a short time. Individuals that came to know Marianne are celebrating her life with memories of her hard work, warm smile, and caring heart. Marianne is survived by her mother, Barbara A. Raley and her sister, Sara Jo Raley, both currently residing in Tarpon Springs, FL, her great aunt Naomi McMillian, Overland Park, KS and cousins residing in various states. She is preceded in death by her father, Joseph C. Raley, Oldsmar, FL, brother, Robert G. Raley, Kansas City, KS, maternal grandparents, Marguerite F. and William Valleau, Overland Park, KS, and paternal grandparents, William F. and Lola F. Higbee Raley, Kansas City, KS. The family appreciates the sincere condolences at this time and would offer a suggestion of memorial contributions in Marianne's name to St. Jude Children's Research Hospital to assist in their continued progress towards cancer treatments. A visitation will be held at L. A. Muhleisen & Son, 2607 Williams Blvd, Kenner, LA 70062 on Friday, January 22, 2016 from 7:30 - 9:30 pm. Additional directions to their location can be obtained by calling them at (504) 466-8577 or visiting their website @ www.muhleisen.com.

Marianne Raley was born July 16, 1956 in Kansas City, Kansas and passed away while in resident at Carpenter House Hospice during the early morning hours of January 19, 2016 after a short but intense cancer diagnosis. During her childhood years,... View Obituary & Service Information

The family of Marianne Raley created this Life Tributes page to make it easy to share your memories.