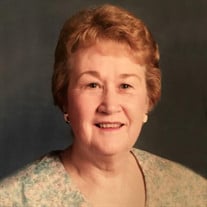 Lucille Watts Walker, age 91, passed away on Sunday, August 23, 2020 as the result of complications from two recent strokes. Lucille was born in New Orleans, Louisiana, and resided in Metairie for the last 61 years. She is survived by her four sons, Earl III (Cindy), Richard (Ana), Vernon (Nancy), and Thomas (Monica); her grandchildren, Theresa (Andrés), Danielle, Earl IV (Shelly), Kyle, Lindy (Daniel), Ellaina, Nathan, Landon, and Easton; and her great-grandchildren, Ayden, Greyson, Isabella, and Winnie. She is also survived by her sister, Ruth Shirley Wondergem and three nieces, Sue, Terry, and Diane. She was pre-deceased by her beloved husband of 60 years, Earl N. Walker, Jr.; her parents, Vernon Howard Watts and Frances Hug Watts; and her sister, Dolores Watts Lindley. Lucille was a member of St. Martin’s Episcopal Church. Lucille graduated from high school at the age of 16 and went on to obtain her degree from Louisiana State University in 1950. She remained an avid LSU fan her entire life. After becoming a mother, she obtained her teaching degree from Tulane University. Lucille taught with the Jefferson Parish School system (Alice Birney Elementary School) from 1972 until she retired in 1991. Lucille loved spending time with family, baking, sewing, clogging, trips to casinos, traveling, and certainly anything competitive, especially sports. In 2010, at the age of 81, she was named the Greater New Orleans District Senior Olympics Female Athlete of the Year and the Louisiana Senior Olympics Athlete of the Year. At that time, she was also a member of the Gator Heads volleyball team, with all team members 80 or older. The Gator Heads won the gold medal at the Louisiana Senior Olympics, sometimes playing teams with members 10 or 20 years younger. Lucille played volleyball for McMain High School and for her sorority when a student at LSU. Lucille remained very competitive her entire life and in 2014 was trying to convince her orthopedic surgeon to replace her shoulder so that she could continue shot put and javelin competitions with the Senior Olympics. Cooler heads prevailed, after a call by the doctor to her son, and she settled for a rotator cuff repair and some less strenuous competitions such as shuffleboard, bean bag baseball, billiards, horseshoes, and Texas Hold ‘Em poker tournaments. But really it just wasn’t in her nature to give up on anything. From the comfort of her easy chair, she scored LSU baseball games in her later years and competed with her sons regularly solving Wheel of Fortune puzzles and playing Jeopardy. Probably her favorite competition was the Saturday night “big stakes” poker game (limit: 10 cent bets) that she hosted. She also loved attending high school football games whenever her son, Richard, and grandson, Kyle, were coaching. The family wishes to express their sincere appreciation to the staffs of Sunrise Senior Living and Heart of Hospice for their care of their Mother during these last four months. Due to Covid-19, a memorial will be held at a later date. To view and sign the online guest book or leave a message about a memory of Lucille, please visit www.muhleisen.com

Lucille Watts Walker, age 91, passed away on Sunday, August 23, 2020 as the result of complications from two recent strokes. Lucille was born in New Orleans, Louisiana, and resided in Metairie for the last 61 years. She is survived by her... View Obituary & Service Information

The family of Lucille Watts Walker created this Life Tributes page to make it easy to share your memories.