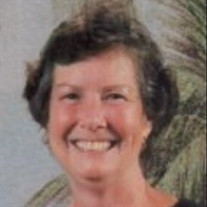 Lillian Elizabeth “Liz” Bloodworth Parker died Monday evening, March 18, 2019 in Harahan, LA. She was 65. Liz was a self-described “social butterfly” who loved nothing better than cooking for dear friends and family, visiting, and traveling. As a young woman, Liz served her country in the Army Reserve and later put her secretarial skills to work with Blount International during their construction of the Superdome. One of her fondest “bragging rights” was being able to tell people that she was there, in her hard hat, the day the roof supports were pulled from under the Dome, and again on opening day to see the amazement on the faces of the Dome’s first visitors. She loved New Orleans like no other place, and thrived on the festivals, and endless entertainments of her chosen home. Liz married James “Slicky” Parker in 1977 and together they opened Slicky’s Pizza in Gentilly where she was able to put her prodigious cooking skills to work by his side for 20 years. The loss of her home during Katrina was taken in stride and Liz moved, with her husband, to Hammond where she worked for Entergy, Inc. until her retirement in 2015. In her retirement years, Liz was devoted to her grandson, Dax, and her late husband’s many grandchildren and great-grandchildren. Liz was preceded in death by her beloved husband, James Daniel Parker, her father, John M. Bloodworth, Sr. and Brother, John M. Bloodworth, Jr. She is survived by her mother, Lillian M. Bloodworth, her son John Thomas “J.T.” Parker (Michelle), grandson, Dax Robert, step-daughters Carolyn Parker Laitala (Robert), Eugenia Parker Thompson, and step-son James D. Parker, Jr. (Sasha Shultz), her late husband’s grandchildren, Mildred, Michelle, Jamie, Rebecca, Collin, Jacob, and Nathan, great-grand-daughters, Nevaeh, Victoria, and Emma, her siblings Charles Bloodworth, Kathy Walker (Larry), Jane Bloodworth, and Robert Bloodworth (Lily), Sisters-in-law, Maureen Bloodworth, Patricia Blue, Shirley Parker, Brother-in-law Daniel W. Parker, and numerous nieces, nephews and grand-nieces and nephews. Relatives and friends are invited to attend the Funeral Service at L. A. Muhleisen & Son Funeral Home, 2607 Williams Blvd., Kenner on Friday, March 22, 2019 at 3:00 p.m. Visitation from 1:00 p.m. to 3:00 p.m. In lieu of flowers, the family requests donations to the American Heart Association, 10 Glenlake Pkwy. NE South Tower, Ste. 400, Atlanta, GA 30328 or www.donatenow.heart.org

The family of Lillian Elizabeth "Liz" Bloodworth Parker created this Life Tributes page to make it easy to share your memories.