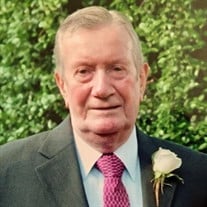 Lawrence P. Toups, Jr. entered eternal rest on Wednesday, July 1st, 2020 at his home in Metairie, LA at the age of 92, surrounded by his family. Lawrence was born on July 19th, 1927 in Beaumont, Texas. He was the eldest son of Lawrence P. Toups, Sr. of Raceland, LA and Jeanne Thiac Toups of Plattenville, LA. Soon after his birth, the family moved back to Napoleonville, LA where he was raised until age 17, when the family moved to New Orleans. He resided in Metairie, LA for the last 62 years. On June 10th, 1955, Lawrence married his devoted wife and best friend of 65 years, Carolyn Schuler Toups. He served in the U. S. Army and was a veteran of the Korean War. He received several medals during his service including the National Defense Service Medal and the Good Conduct Medal. After his military service, Lawrence attended Tulane University at night on the G.I. Bill while working 2 jobs to support his family and received his Bachelor’s Degree from Tulane. Lawrence had a long career working for Sentry Insurance Company. Lawrence had a vivacious love for all things football, and was an ardent LSU and Saints football fan. He loved to invest in the Stock Market and followed it daily. He was a doting Father, Grandfather and Great Grandfather. Lawrence was preceded in death by his parents Lawrence and Jeanne Toups and also his brother Emile Toups. He is survived by his wife Carolyn Toups, his brother Donald Toups, children Lawrence Toups III, Thomas Toups, Karen Carr (Jay), six wonderful grandchildren Larry Toups, Dennis Toups, James Carr IV, Mandi Nicholas (Casey), Wesley Toups (Katie), Jeffrey Toups (Hayley) and 5 beautiful great grandchildren, Phillip, Marina, Marcus,Wesley Jr. and Isaac, all of whom brought great joy to his life. He also leaves behind numerous nieces and nephews that he loved very much. Lawrence was a rare and unique individual and his humorous character will be deeply missed by all. He lived a long, happy and fulfilled life. Although God has called him home, he will be in our hearts forever. Please join us in celebrating his life on Saturday, July 18th, 2020 at L. A. Muhleisen & Son Funeral Home, 2607 Williams Blvd., Kenner, LA. Visitation from 9:00 a.m. to 11:00 a.m. followed by a Memorial Service at 11:00 a.m. To share memories or condolences, please visit www.muhleisen.com

Lawrence P. Toups, Jr. entered eternal rest on Wednesday, July 1st, 2020 at his home in Metairie, LA at the age of 92, surrounded by his family. Lawrence was born on July 19th, 1927 in Beaumont, Texas. He was the eldest son of Lawrence P.... View Obituary & Service Information

The family of Lawrence P. Toups, Jr. created this Life Tributes page to make it easy to share your memories.