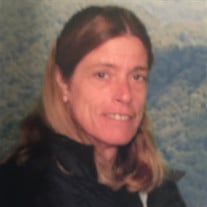 Kim Marie Russell passed away on Sunday, March 6, 2016 after a brief illness of lung cancer. She was 59, a native of New Orleans, reared in Jefferson and a resident of Norco for the past 14 years. She attended St. Agnes Grammar School and Riverdale High School. Kim enjoyed playing sports and dancing. She also enjoyed playing cards, was a master at crossword puzzles and an avid LSU and Saints fan. She believed in doing a job well and was employed at W. R. Zanes & Co. of LA, Inc. for the past nine years. Kim is survived by her loving partner and soul mate of 24 years, Debra Hartman and Debra’s children, Don, Dannell, Dana and their families. Beloved daughter of Sue Lucas Russell and the late Richard G. Russell. Sister of Richard Russell, Jr. (Theresa), Terry Russell Burkett (Robert), Bruce Russell (Rebecca), Ginger Russell Ohlsson (Carl), Lisa Russell (Chris), Scott Russell (Sheramy), Troy Russell (Amanda), and stillborn siblings, Anne, David and Mary. Granddaughter of the late James Louis and Anna Delores Howard Russell and Clarence S. and Louise Walters Lucas. Niece of Louise Lucas Barr and William Russell. Godmother of Melissa Burkett and Kali Russell. Numerous nieces and nephews, cousins and close friends have shared in Kim’s genuine openness and fondness of storytelling. Kim touched so many people during her life and enjoyed spending time with her friends and extended family. She was always willing to listen and to offer a helping hand. Kim held all the children in her and Debra’s family in a special place each day, and wanted to make sure we would tell them often they were her little “sweethearts.” A special thanks to Notre Dame Hospice of New Orleans for their immeasurable support and caring. Relatives and friends are invited to attend the funeral. A Funeral Mass will be celebrated at the Kenner Funeral Home of L. A. Muhleisen and Son, 2607 Williams Blvd. on Thursday, March 17, 2016 at 3:00 p.m. Visitation from 1:00 p.m. until 3:00 p.m. on Thursday. In lieu of usual remembrances, donations in Kim’s name to the American Lung Association, 2325 Severn Ave, #8, Metairie, LA 70001, preferred.

Kim Marie Russell passed away on Sunday, March 6, 2016 after a brief illness of lung cancer. She was 59, a native of New Orleans, reared in Jefferson and a resident of Norco for the past 14 years. She attended St. Agnes Grammar School and... View Obituary & Service Information

The family of Kim Marie Russell created this Life Tributes page to make it easy to share your memories.