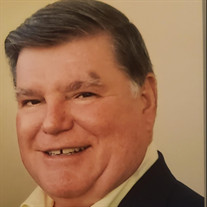 Kenneth Barr “Ken” Caldcleugh, age 70, of River Ridge, Louisiana passed away peacefully on Thursday December 5, 2019 with his family by his side. A Mass of Christian Burial will be celebrated at St. Matthew the Apostle in River Ridge on Friday, December 13th with visitation starting at 10:30am and mass at noon. Ken was born in San Antonio, Texas on August 22, 1949 to Owen and Francis Caldcleugh. He attended Lubbock High and went on to earn his Bachelor’s degree from Texas Tech University. He met his wife, Joanne Marie Hart, in Lubbock and they were married on March 25, 1972. Ken’s career and passion for the wine industry started at an early age when he accepted a job working for Glazers Wholesale Distributors. His career took them to Amarillo, Houston, Dallas and finally to New Orleans, Louisiana in 1981 which became home for the past 38 years. By this time Ken’s business acumen, natural leadership, hard work and dedication led him to become Vice President of Glazers, a company he successfully ran until he decided to start his own business in 1995. He designed, built and opened The Cellars of River Ridge, a boutique neighborhood wine shop and deli. He poured his passion into this new venture and working alongside his wife and four children, met many lifelong friends and built a life’s time worth of memories. After hurricane Katrina, Ken set out on yet another professional adventure when he was asked to start a new Wine and Spirits division for the Anheuser-Bush distributor, Southern Eagle, and once more when the Benson’s asked him to become the General Manager of their new acquisition of a classic New Orleans brand, Dixie Beer. Ken had a zeal and passion for life that was seldom matched. He had a quick wit and could tell a great tale. He had the biggest of hearts and he had a unique way of making everyone around him feel loved and respected. He cared deeply about others and because of that he touched so many people’s lives and changed them for the better. He was an avid sports fan and was particularly passionate about his Texas Tech Red Raiders and his New Orleans Saints. He was a family man and spent most of his time with his wife, children and grandchildren. He was preceded in death by his parents, Francis and Owen Caldcleugh and sister, Gail Dean. Left to cherish his memory are his devoted wife of 47 years, Joanne Marie Hart Caldcleugh; his four children, Joey Caldcleugh (Jennifer), Jamie Caldcleugh (Ana), JP Caldcleugh (Mandy) and Josh Caldcleugh (Jackie); two brothers, Scott Caldcleugh and Ron Caldcleugh (Jill); and five grandchildren, Christian Guillory, Caleb Caldcleugh, Adrianna Caldcleugh, Jude Caldcleugh and Mallory Caldcleugh. The family offers its many thanks for the loving support, concern and prayers of friends and family and requests that in lieu of flowers, memorial donations be made to Benson Cancer Center.

Kenneth Barr &#8220;Ken&#8221; Caldcleugh, age 70, of River Ridge, Louisiana passed away peacefully on Thursday December 5, 2019 with his family by his side. A Mass of Christian Burial will be celebrated at St. Matthew the Apostle in River... View Obituary & Service Information

The family of Kenneth Barr "Ken" Caldcleugh created this Life Tributes page to make it easy to share your memories.