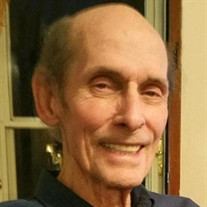 Beloved New Orleans Talk Show Legend Keith Rush (The Original Rush) passed away peacefully on Thursday, October 22, 2020. Keith was born in Mobile, Alabama on August 18, 1931 and moved to New Orleans at age 10. He started his career in radio on February 16, 1952, at the age of 20, at KLOU Radio in Lake Charles, LA. During his time at KLOU he interviewed upcoming greats including a young Tony Bennett. Keith’s career continued in New Orleans at WWEZ as a Country Music Disc Jockey. He later became the very first "Honorary" member of LSU Statewide Alumni Association in the History of LSU. During his Broadcasting years , Keith received many awards but his most cherished recognition was the Freedom's Foundation Award in 1972 for his fight against "Filth" in Radio and Television. Representatives came to New Orleans to honor him. From 1953-1956 Keith Rush booked Acts on the Louisiana Hayride including George Jones, Johnny Cash, and Elvis Presley. In Early February 1955, Keith was the very first promoter to bring Elvis Presley to New Orleans from the Louisiana Hayride to appear at the Jesuit High School Auditorium on February 4, 1955. At that time Elvis was only known for two songs: Blue Moon of Kentucky and That's Alright Mama. Elvis appeared with Ann Raye that night who was the opening Act. The Elvis Show at Jesuit High was promoted on WBOK Radio by DJ Red Smith. Elvis had two shows that night and the ticket price for each show was only $1.00. The total attendance for both shows was 54, Elvis was paid $75.00 for his performance. Keith lost money on the Elvis promotion and he may be the only promoter in the history of Elvis performances to lose money on his show. From 1957-1959 Keith Rush served two years active duty in the United States Army, 4th Infantry Division, at Fort Lewis, Washington. In 1959 he returned to New Orleans to continue his beloved radio career at WSMB. During his rise as a radio talk show icon, Keith had conversations with Ronald Reagan, Bob Hope, Phil Harris and Frankie Laine along with many local Radio , TV and musical and performing arts celebrities. Keith's Conservative Political Talk on WSMB made news by offering News makers an open microphone. Keith has even written musical lyrics . Frankie Brent and others recorded music to his songs. For many years at WSMB Keith Rush's Radio show followed the popular duo of Nut & Jeff. WSMB was the most listened to radio station at that time. The early 1960's WSMB show history which captivated the New Orleans Radio audiences of Marshal Pearce, Sid Noel Rideau, Scott Muni and Jim Brown lead to shows several years later with Nut & Jeff in the mornings, Keith Rush following with Larry Regan and later arrivals of Jerry Valence, Terry Powell, and Bob DelGiorno. Keith Rush was close friends with the Chehardy Family and called Lawrence Chehardy “Little Brother”. He was also close friends with Judge Steve Mortillaro, Jon Gegenheimer and Rick Trotter, among many others. Keith along with Hap Glaudi were Judges in several Pontchartrain Beach Beauty Contests in the mid 1960's. Hap Glaudi came to the WSMB Radio Studio one day as a DJ and brought his own records with him. After the WSMB Radio years, Keith Rush worked with Robert Namer at WTIX AM and later at (WASO) (Where America Speaks out, known as Hot Talk Radio) in Covington, La. In 1991. Robert Namer had Keith Rush (a Conservative Talk Show Host) along with Ron Hunter (A Former TV Anchor& New Orleans Broadcasting Legend and conspiracy theory reporter) clashed their opinions together on WASO which had great ratings. As a result WASO Radio became the only Northshore Radio Station that made the Arbitron Ratings. One of Hot Talk Radios most memorable moments came in the early 1990s when Bill Clinton came to New Orleans for a visit when Keith Rush mentioned his negative agenda on the Hot Talk Radio program. A Couple of Secret Service Officials showed up at the Radio Station to question Keith about his radio statements. Keith Rush was proud to serve as a Causeway Bridge Commissioner in the 1980's. Keith loved to question the world of Politics in a conservative view. The last of a Historical Era in New Orleans Radio Ended with Keith Rush's passing. Keith’s last Hot Talk Radio Internet Broadcast ended on August 15, 2016. He was a Radio Broadcaster's image of perfection and was highly respected and brought Honesty and Integrity to New Orleans Radio and was a master of words as a result he became the Legendary "Father of Talk Radio in New Orleans". Keith was a Devout Catholic who prayed the Rosary and had a personal relationship with our Loving Savior. Keith and his lifelong friends, Hap Glaudi, Pete Fountain and Dr. Frank Minyard are reunited once again. Beloved husband of Rachel Leblanc Rush and the late Barbara B. Rush of 46 years. Father of Margaret Rush Singh (Sarbjit), Rebecca Rush Abadie (Charles), Deborah Rush Smith and the late Keith W. Rush, Jr. and Kenneth W. Rush. Grandfather of Nicole, Devin, Ashleigh, Christina, Christopher, CJ, Lauren and Katie. Great-grandfather of Jaime, Reauxin, Gracelyn, Brookelyn, AJ, Everleigh, and Dominick. Son of the late Margaret Elizabeth Webb Berry. Step-son of the late John Clarke Berry. Brother of Mary Margaret Rush Landry and the late Robert K. Rush. Brother-in-law of Pratt Landry and the late Kenneth Kissel. Also survived by many nieces and nephews. Keith has had an extraordinary life in Radio that spans over a 60-year career, more than anyone in New Orleans Radio History. Relatives and friends are invited to attend the visitation at St. John the Baptist Catholic Church (Gold Steeple Church), 1139 Oretha Castle Haley Blvd., New Orleans, LA, on Tuesday, October 27, 2020 from 9:30 a.m. until 10:30 a.m. followed by a Memorial Service at 10:30 a.m. Arrangements by L.A. Muhleisen & Son Funeral Home. To share memories or condolences, please visit www.muhleisen.com

The family of Keith Rush created this Life Tributes page to make it easy to share your memories.