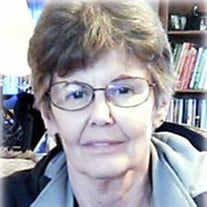 Kathleen Mary Kelly Hric, 73, born on September 13, 1942 in New Orleans, LA passed away peacefully at home in Geismar, LA on January 11, 2016 after a long illness. She was a graduate of the Redemptorist High Class of 1960. She was a retired MSgt with the Louisiana Air National Guard and served active duty with the United States Air Force in the early 1960’s. She resided in St. Bernard Parish from 1973 until displaced by Hurricane Katrina. She was active in St. Robert Bellarmine Church and the St. Bernard Republican Women’s Club. Post Katrina she settled in Geismar and was an active member of St. John the Evangelist Catholic Church and a member of the Ladies Alter Society in Prairieville, LA. She was a member of Ascension Republican’s Woman. She is survived by 4 children, Kelly Hric Couture (Clifton) of Geismar, LA, Stephen Hric, Michael Hric, and Sonja Hric Grabel (Adam) all currently residing in Portland, OR along with three beloved grandchildren, Nicholas Couture, Alexandra Couture, and Tessa Grabel. She was the daughter of the late Louis and Marguerite Kelly and the sister of Mickey (Charles) Brovelli and William Kelly and the aunt of many nieces and nephews. She was preceded in death by her ex-husband Stephen Edward Hric. Along with her love of our Country, the United States Air Force and the military in general, she loved being a wife, mother and homemaker with a talent for gardening and sewing. Relatives and friends are invited to attend the Visitation at L.A. Muhleisen & Son Funeral Home, 2607 Williams Blvd., Kenner on Friday, January 15, 2016 from 6:00 p.m. to 9:00 p.m. A Memorial Mass will be held at St. Mary’s Assumption Catholic Church, 923 Josephine St., New Orleans on Saturday, January 16, 2016 at 1:30 p.m. Inurnment in St. Patrick Cemetery No. 1. In lieu of flowers, the family requests donations to Fisher House, St. Jude, or Amedisys Hospice in Baton Rouge, LA.

Kathleen Mary Kelly Hric, 73, born on September 13, 1942 in New Orleans, LA passed away peacefully at home in Geismar, LA on January 11, 2016 after a long illness. She was a graduate of the Redemptorist High Class of 1960. She was a retired... View Obituary & Service Information

The family of Kathleen Mary Kelly Hric created this Life Tributes page to make it easy to share your memories.