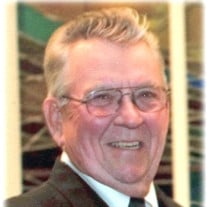 Joseph “Ta” Aymami, Sr. peacefully left his earthly body to be with his Lord and Savior on Wednesday, January 30, 2019 at his home in Metairie surrounded by his loving family and friends. He was 77, a native of Carrollton (New Orleans) and a resident of Metairie. Joe was self-educated and he owned his own business, Aymami’s Repair Service for over 30 years. But first and foremost he was a good husband, father, and friend. He will be remembered as a person who loved to talk to everyone; someone who never met a stranger. Everyone who knew him loved him, especially by all those at his beloved Sam’s Club in Metairie, LA where he will be missed by many employees and customers as well as his friends in the Coffee Club. He was the former Vice-President of the Camper Saints Camping Club. Joe was the beloved husband for 57 years of Linda Deuchert Aymami. Father of David Aymami (Beth), Susan A. Bigler (Jeff) and the late Joseph “Jay” Aymami, Jr. (Kathleen). Honorary father of Terry Johnson (Wanda). Son of the late Andrew Joseph Aymami and Edna Claire Anderson. Grandfather of Jared Treadaway, Kyle Zito (Kellie) and Ryan Zito (Christi Sheldon). Great-grandfather of Ty Treadaway, Alexis and Cole Zito and Hayden and Landon Zito. Brother of Andrew “A.J.” Aymami (Kathy), a sister and the late John G. “Jack” Aymami, Juliette A Sheffield, Thomas L. Aymami, Nathalie and Gretchen Aymami. Nephew of Lucille “DeeDee” Gebhardt. Joseph was also a beloved adopted member of the Milano family, the late Charlie and Joanie Milano and their children Kenny, Kerry, Keith, Kevin, Kathy, Kristi and Marc. Pallbears will be Terry Johnson, “A.J.” Andrew Aymami, Thomas Aymami, Keith Milano, Kenneth Putfark, Jared Treadaway, Kyle and Ryan Zito. Relatives and friends are invited to attend the funeral. Services at St. Matthew’s United Methodist Church, 6017 Camphor St., Metairie, LA 70003 on Sunday, February 3, 2019 at 4:00 p.m. Visitation at church from 2:00 p.m. until 4:00 p.m., The Reverend Cherie Godwin, Officiant. Interment in Carrollton Cemetery at a later date. In lieu of flowers, please consider a donation in Joe’s name to the America Cancer Society, 2605 River Rd, New Orleans, LA 70121 or the charity of your choice.

Joseph &#8220;Ta&#8221; Aymami, Sr. peacefully left his earthly body to be with his Lord and Savior on Wednesday, January 30, 2019 at his home in Metairie surrounded by his loving family and friends. He was 77, a native of Carrollton (New Orleans)... View Obituary & Service Information

The family of Joseph "Ta" Aymami Sr. created this Life Tributes page to make it easy to share your memories.