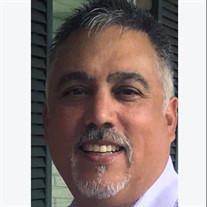 John Phillip Sanders passed away in his home on Friday, March 5, 2021 at the young age of 56. He was a native of Lake Charles, LA and a resident of Kenner, LA for the past 23 years. Beloved husband of Cassandra Ann Sanders. Loving father of Trista (Simon), Jeremy (Angie), Matthew, Phillip, Caroline, and William. Proud grandfather of Kirby Sanders Alleman and Sky Vincent Sanders. Devoted son of Leticia Pilola Sanders and Raymond Edwin Sanders, Jr. Older brother of Margaret (Rocko) Brocato, Donna (Rod) Hanks, Jason (Kristin) Sanders, and Roger (Melanie) Sanders. Also survived by aunts, uncles, nieces, nephews, and in-laws, Carl and Doreen Stinchcomb. John graduated from LaGrange High school in 1982. He proudly served in the US Army until 1992 ranked as a SPC E4. He worked as an insurance agent at T.W.F.G. in New Orleans. He was a member and greeter of Celebration Church in Kenner, LA. Growing up, he loved to hunt and fish with his Dad and brothers sharing these childhood memories often and vividly. Racquetball was his all-time favorite sport. He used strategy and strength on the court to place the ball right where he wanted. He cherished the lifelong friendships he built on the court. He was an avid sports fan who yelled at the tv during many Saints and college football games. He was also an aficionado of horrible movies, a reader of thousands of books, and loved all range of music from Pavarotti to Rascal Flatts and everything in between. He passed his love of music on to all his children. You would also see him picking up pennies whenever he saw one. It would give him the opportunity to share the Penny story and be a disciple to others. Stamped on each penny is “in God we trust”. The story goes "It is as if God has dropped a message into my pathway and He wants to remind me to keep my trust in Him." He thoroughly enjoyed cooking and he was great at it. His gravy, gumbo, egg rolls, and pecan pies were unparalleled. And often, after supper, a piece of pie with a scoop of vanilla ice cream would magically appear over your shoulder without you even having to ask for it. He genuinely loved to serve. It was how he best demonstrated his love for others. He accepted Jesus Christ into his heart and his faith was exemplified through his service and love. He served as a Galatas football, basketball, and baseball coach mentoring many, many young men who would still drop in to pay him a visit. John was the best listener who gave the tightest bear hugs. He was funny and when he laughed, his smile would light up the universe. He loved his Lord, his wife and children, his family, friends and colleagues, and even strangers. It came so naturally, freely, and unconditionally. Go rest now, good and faithful servant. Be our angel and keep watching over us. On Thursday, March 11th, 2021, two Celebration of Life services will be held in his home at 35 Antigua Drive, Kenner, LA 70065. Family only from 1-2; Friends are invited to attend from 2-4. A full military service will be announced at a later date. In lieu of flowers, please consider a donation to Celebration Church’s “Accomplish the Vision” fund in John’s name. These funds will go towards the Youth Outreach Center in Kenner.

John Phillip Sanders passed away in his home on Friday, March 5, 2021 at the young age of 56. He was a native of Lake Charles, LA and a resident of Kenner, LA for the past 23 years. Beloved husband of Cassandra Ann Sanders. Loving father of... View Obituary & Service Information

The family of John Phillip Sanders created this Life Tributes page to make it easy to share your memories.

John Phillip Sanders passed away in his home on Friday, March...