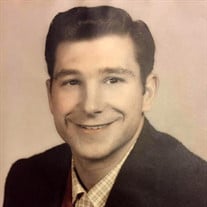 John H. Bailey Jr., age 80, passed away on January 6, 2021 at his home in River Ridge, Louisiana. He was born in Union, Ms on April 19, 1940 to the late Herschel and Irene Bailey. On January 12, 1962, John married the love of his life, Betty Jean Boswell and moved to Kenner, La where he was employed with Delta Airlines. He worked for 31 years, held many positions and retired at the age of 55 as supervisor. John was a veteran of the United States Army and was a 32nd Degree Mason since 1970. John had many accomplishments in his life. He was the star quarterback for the Union High School Yellow Jackets from 1954-1958 and graduated in 1958. He attended college at East Central Community College, Ole Miss and Mississippi College from 1958-1961. He later attended Lasalle University from 1965-1968. John loved going home to Union, Ms. to visit friends, attend class reunions and relive old times. He was the proud owner of a houseboat on the Blind River and Alligator Bayou for 49 years, where he shared many wonderful memories with family and friends. John loved hosting seafood boils and frying fish for friends and out of towners. His hobbies were spending time with family, sharing memories of days gone by, hunting, fishing, and reading. John and Betty’s home was always full of love and laughter. Their doors were always open to all neighboring children. John is survived by his wife of 59 years, Betty Bailey, their 3 sons, Johnny Bailey of Metairie, La., Terry Bailey of Ponchatoula, La. and Coyt Bailey of Independence, La., 7 grandchildren and 11 great grandchildren, sister Rita (Bill) McMahan of Jackson, Ms., sister in laws, Eva Grace Sciple of DeKalb, Ms., Judy Hollingsworth of Madison, Ms., Susan Dow of Union, Ms. and a host of nieces and nephews. He is proceeded in death by his parents Herschel and Irene Bailey, Brother Coyt Bailey, Granddaughter Braelyn Bailey and Great Granddaughter Briella Monteleone. John will be greatly missed by family and friends. God saw the road was getting rough, the hill was hard to climb; He gently closed those loving eyes and whispered “Peace Be Thine.” Memorial Services will be announced at a later date.

The family of John H. Bailey Jr. created this Life Tributes page to make it easy to share your memories.