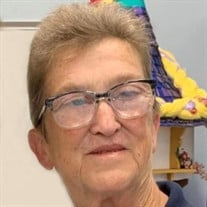 Jody Anne Peterson Brescher, age 66, of Metairie, Louisiana passed away on Sunday, August 15, 2021. Jody was born in New Orleans on December 30, 1954, to the late Dorothy Anne Wagner Peterson. Jody is survived by her children Mitzi Anne Brescher (Tommy), Mindi Brescher LeCarpentier (Jeff), Michael James Brescher Sr. (Tiffany), Nikki Anne Brescher (Danny), and Jamie Jo Brescher (Jureem). Loving grandmother to her many grandchildren; Renai Dorothy Brescher, Michael James Brescher Jr., Zachery Eathan Farley, Tyler James Brescher, EmmaLynn Dorothy Brescher, IsaBella Dorothy Brescher, Dylan Jason Guidry, Lyla Dorothy Brescher, Nicholas James Brescher, Jayla Dorothy Byrd, Octavia Dorothy Byrd, and Dominick James Byrd. She is also survived by her siblings; Cheri Peterson Faucheux (Benny), Kirk Peterson, and Doug Peterson; many nieces and nephews, cousins, and beloved friends. Jody was a caring and loving person, always doing for others. She was a devoted New Orleans Saints, Notre Dame football, and Chicago Cubs fan. She truly enjoyed having a good time with her family and friends. As a child she attended Wagner School of Dance where she eventually became a dance instructor, teaching children the fundamentals of tap and jazz. As a teen she competed with the New Orleans Recreation Department twirling team as a Candy Cane, where they won many accolades. Jody also taught at the New Orleans Recreational Department as a baton instructor where she led the Dixie Twirlers and was well known for twirling the fire batons during the half time shows at the New Orleans Jazz basketball games. She then became a devoted mother to her children, while working at numerous bingo halls around the city and for Mitchell Brothers Amusement where she would spend her summers traveling around Louisiana following the greatest festivals in the South. But ultimately her true passion was spending time with her grandchildren. She was beyond proud of them and supported their many aspirations. MawMaw was always there, cheering on and spoiling each and every one of them. Relatives and friends are invited to attend the service at L.A. Muhleisen & Son, 2607 Williams Blvd, Kenner, LA on Saturday, August 21, 2021, at 6:00p.m., visitation will begin at 3:00p.m. A celebration of life will immediately follow the services at KJ’s Place, 2500 West Metairie Ave, Kenner, LA. In lieu of flowers, donations to cover funeral cost would be greatly appreciated.

The family of Jody Anne Peterson Brescher created this Life Tributes page to make it easy to share your memories.