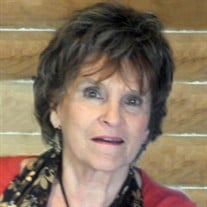 Joan Fretwell Montecino passed peacefully in her sleep on Wednesday, February 2, 2022 at the age of 86. Born and raised in New Orleans, Joan attended Sacred Heart of Jesus on Canal, married her high school sweetheart and began a family. They moved to Harahan where they became active members of St. Matthew the Apostle Parish. Several years later, they purchased their first home on Shirley St. in Metairie where they raised their family and lived out the next 49 years, among the best of neighbors and friends. Joan was very active at Our Lady of Divine Providence parish, first as a physical education teacher, then a Choir Director, and one of the leaders of the O. L. D. P. “E. Y. O” (not just C.Y.O. but Everyone’s Youth Organization). She was a nurturer and became like “another mom” to several young people that were drawn to her. She considered them and so many others through the years, extensions of her family! While singing at church, she was approached by a visitor in attendance that day, he gave her his card, which led to several meetings and launched her Country Music singing career. She performed locally with her band, ‘Joan Montel & the Country Sound.’ Later, she went on to record several records in Nashville. When illness struck at home, she left her singing career to care for her husband and her mother. She continued her studies earning a degree in Nutrition, then in Floral Design and continued her education becoming a Licensed Master Florist. Wife of the late Jules Thomas Montecino, “the love of her life,” for 53 years. She leaves behind devoted daughter and son-in law, Jackie & Glen Lapouble, her loving son, Brice Montecino & Beth, and her son-in-law, Joseph Ysusi. Preceded in death by her daughter, Debbie M. Ysusi, also, two sons, Jules T. Montecino Jr. and Ronnie J. Montecino. Daughter of the late Lucy Chabaud Fretwell and John Joseph Fretwell. Sister to the late John J. Fretwell Jr., Patricia, “Pat” her sister-in-law, confidante and best friend, William “Bill” Fretwell & his late wife Manuella. Also the late half sister, Betty, her late husband Warren and Betty’s son the late Floyd Eisenhardt, Jr. (Maria), late half sister Diane (Skip) and her 3 sisters-in-law, Virginia “Ginger” Montecino & her late husband, Allen, Laurelyn Verdun and the late Kathy Bigham. Grandmother to Tara Ivey & her husband David, Jennie Benedict & her husband Charlie, David Lapouble & Pennye, and Jessica Ysusi & Frank Conforto, Jr. Great grandmother of Genevieve Allen, Kayla Ivey, Heaven Benedict, Hunter Ivey, Natalia Williams & dad, Adam, Love Lapouble and mom, Erica, Riley Lapouble, Nathan Rice, Sawyer Lapouble, Peter Lapouble and Giovanni Conforto. Great-great grandmother “Gigi” to McKenzie Allen. She also had several nieces and nephews who lovingly grew up calling her “Aunt JoAnn.” Extended family included but not limited to: the late Adele C. b.f.f., George H., Gary & Jane, Daisy, Bryan, Belinda, Donnie & Liz, David Norman, the late Gerrie N. b.f.f., Josie D. b.f.f., Megan, sweet “Addi”, Paul ...) Joan adored everything Christmas: from carols to decorating, cooking, and baking with her grands for the holidays. She loved Disney World, High-Tea, Chocolate, Starbucks, watching Hallmark in her pj’s while drinking hot chocolate with mountains of whip cream, but most of all, SHE LOVED BEING WITH HER FAMILY! She had a zest for life and a pep in her step and genuinely loved connecting with people, that’s why it was so sad when Alzheimer’s crept up on her. She left her home in Metairie and moved to Kenner with family the past 6 & 1/2 years of her life, then due to Hurricane Ida damage, spent a month & 1/2 of love with the Trager family, and finally to St. Joseph’s of Harahan for her last 2 & 1/2 months. We are so fortunate that she never forgot any of us, even if she did call some of us by another’s name, or even when mad, called us something in Creole-French-slang! (Ha ha) Faith and Family were the hallmarks of Joan’s life and the legacy she leaves to us. On 2/2/22 this Lady who was just “too-too,” slept peacefully as the angels came and ushered her into the Kingdom of our Lord Jesus. She will be missed by so many! Special thanks to The Alzheimer’s Association, Home Instead Senior Care, The Council on Aging (especially Lorraine & Keith), and St. Joseph’s of Harahan staff and sweet Lena, her roomie and friend. Thanks for all the love, laughter and friendship you all provided for Mom. Thanks to all our family and friends for your love and support at this time. A Memorial Mass will be celebrated on Tuesday, April 19, 2022 in the Chapel of L.A. Muhleisen & Son, 2607 Williams Blvd., Kenner, LA from 3:00 p.m. to 4:00 p.m. Visitation will be from 1:00 p.m. to 3:00 p.m. To share memories or condolences, please visit www.muhleisen.com

Joan Fretwell Montecino passed peacefully in her sleep on Wednesday, February 2, 2022 at the age of 86. Born and raised in New Orleans, Joan attended Sacred Heart of Jesus on Canal, married her high school sweetheart and began a family. They... View Obituary & Service Information

The family of Joan Fretwell Montecino created this Life Tributes page to make it easy to share your memories.

Joan Fretwell Montecino passed peacefully in her sleep on Wednesday,...