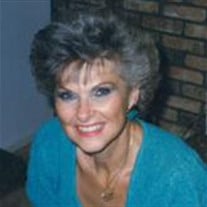 Jeanne “Nunie” Taillac delCastillo, known to her family and friends as "Nunie," went to be with her Lord on Wednesday, October 25, 2017 at the age of 84 years old. Beloved daughter of the late Roland J. Taillac and Smithsonian Institute's "Praline Queen," Louise Schwall Taillac. Sister of Jackie T. Holifield and the late Judith T. Watson. Loving mother of Jeanne Robin Eno (Ron Barkley), Roberto Eduardo delCastillo, Jr. (Cynthia delCastillo), Eduardo Roberto delCastillo, Sr. (Miriam "Mimi" Barr delCastillo), Tammy Killen Derrick and late Bobbie Louise Barr. Compassionate grandmother of the Stephanie, Rocky(Brandy), Cristina, J'londa, Michael and late Jannie J'Nea Killen and James Barr, Jr. Great-grandmother of Maritza, Jedidiah, Jeremiah, Liv, Cassidy, Trey, Alyssa, Crissinda, and Kade. Also survived by numerous nieces and nephews. Jeanne "Nunie" was born in New Orleans, Louisiana and moved to Bay St. Louis, MS where she attended high school at St. Joseph's Academy High School. At the age of 18, she returned back to New Orleans, got married, and had 4 children. She later divorced and became a single mother raising her 4 children on her own. She attended Charity Nursing School for 2 years, and self-taught herself Spanish to become bilingual. She was the Assistant Office Manager for Ray Mercantile Company, New Orleans, 1958-1964. Consul, Maritime Commercial Officer Consulate General Panama, 1964-1972; Manager, McDermott International, Inc., since 1972. Through her perseverance and dedication, Nunie climbed her way from a secretarial position to become the Vessel Documentation Administrator/Equipment and Machinery Group. During her 42 years of employment with J. Ray McDermott, Inc., she won many prestigious honors that included "1990 Woman of the Year," "Most Admired Woman of the Decade," "Community Leaders of America," "Outstanding Professional Performance," "Who's Who in Finance and Industry," "5000 Personalities of the World," "Personalities of the South," "Who's Who of American Women," "World's Who's Who of American Women," "2000 Notable American Woman," "Roll of Honor-International Leadership Award," and "Partner in Education". In addition to honors she achieved in her professional career, she received the Recipient Merit Award Bayside Fire Department, Bay St. Louis, 1987, Certified of Appreciation, 1992; New Orleans Soccer Leagues, 1971, Education Support Award, 1991, Partners in Education Award, 1991, Outstanding Support in Education Award, 1992, and Dedication to Education Award, 1993. She was the President, owner Kiddie Kare Train'n Station. Consultant Consulates of Panama, Houston, New Orleans, since 1972 and the Coordinator for Panama Maritime Licensing, since 1985; Co-chairman Jerry Lewis Telethon, New Orleans, 1977; Fundraising Co-Chair Annual Handicapped Children's Easter Parade, Board Directors Louisiana School for Deaf, Baton Rouge, since 1985, Station WNNR-Radio, 1972-1974, New Orleans Soccer Association, 1969-1973; and President Costa Rica Soccer Association, 1969-1972. In addition to supporting her own family, her generosity to her community was endless, and she was a true supporter of No Child Left Behind. She would always go out of her way to make sure any less fortunate child she knew did not go without. She was an advocate for Chinchuba Institute of the Deaf, she hosted entire Christmas parties for the Louisiana School for the Deaf, she sponsored Hope Haven of Hancock County, MS by donating a home to the abused children to have a safe place to live, and she contributed to the Mission Love Seeds to help families in Kenya. She volunteered so much of her time and belonged to the Fundraiser Bayside Volunteer Fire Department, Bay St. Louis, Mississippi, since 1986; Co-chairman State Sex Education Handicapped Children Comn., Baton Rouge, since 1986; Chairman Handicapped Children Christmas Program; Member Hancock County Humane Society; Member Panama Maritime Advisory Committee, Panama Chamber of Commerce and Industry, United States Chamber of Commerce in Panama, Mississippi Chamber of Commerce, and Hancock County Gaming and Tourism Association. Not only did her huge heart touch the lives of so many people, her compassion for animals was immeasurable. Whether she found them roaming in her neighborhood or she saw stray cats outside of a restaurant, she was not leaving them alone until she made sure they were fed. She also donated to numerous animal organizations to help save the lives of so many stray or abandoned animals. Whenever she was not devoting herself to her family or her friends and communities, Nunie enjoyed traveling to her favorite city, Mexico. She also took pleasure in camping, bowling, playing claw machines, and going to the casinos. After fully retiring in 2015 at the age of 82, she loved to frequently visit with her family and friends in Bay St. Louis, MS, which became her second home. She always kept up to date with her family and friends and was known as the "Facebook Queen." All of her life Nunie worked hard and made many sacrifices so that her family would not go without, but her "proudest accomplishment in life" after raising her 4 children on her own, was raising her granddaughter, Tammy, as her own daughter. She was a remarkable woman that will be deeply missed by all those who had the honor of knowing her or were touched by her grace. Relatives and friends are invited to attend the Memorial Mass at L. A. Muhleisen & Son Funeral Home, 2607 Williams Blvd., Kenner on Saturday, November 4, 2017 at 12:00 p.m. All are welcome to attend the visitation from 10:00 a.m. to 12:00 p.m. before Mass commences. Inurnment in Greenwood Cemetery. In lieu of flowers, anyone wishing to do so is encouraged to make a donation to the Louisiana SPCA in honor of Jeanne "Nunie" delCastillo.

Jeanne &#8220;Nunie&#8221; Taillac delCastillo, known to her family and friends as "Nunie," went to be with her Lord on Wednesday, October 25, 2017 at the age of 84 years old. Beloved daughter of the late Roland J. Taillac and Smithsonian Institute's... View Obituary & Service Information

The family of Jeanne "Nunie" Taillac delCastillo created this Life Tributes page to make it easy to share your memories.

Jeanne “Nunie” Taillac delCastillo, known to her family and friends...