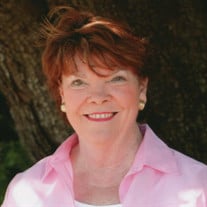 Isabelle “Isie” Katherine Eason Glenn, died peacefully at her home Friday, January 12, 2018, surrounded by her loving family and friends. Isie was born in New Orleans to the late Jesse Angus Eason and Isabelle Reilly Eason. Isie graduated from Metairie High School and attended LSU where she was a member of Phi Mu Sorority. She left LSU to become a buyer at Kreeger’s Clothing Store. She was preceded in death by her loving husband, Hugh Marvin Glenn, Jr., her brother’s, John Angus (Sissy) Eason, Albert Bernard (Jeanne) Eason and her loyal four-legged companion, Abbie. She is survived by her son, Jonathan Drummond Glenn, daughter, Melissa Glenn Schaff, granddaughter, Emily Rae Schaff and sister, Margaret Dale (Pat) Rieth. She is also survived by numerous nieces, nephews and cousins. She also leaves behind many great friends. Isie loved to entertain, cook, garden and her greatest joy was spending time with her granddaughter. She was a member of the Board of Trustees at St. Paul’s Episcopal School for twenty-five years. She was a longtime member of the Blue Goose Women’s Auxillary and the Metairie Garden Club. She was also a member of Metairie Women’s Club. Isie loved anything New Orleans, especially a party like Mardi Gras and a New Orleans Saints game. A celebration of life will be held at St. Paul’s Episcopal Church, 6249 Canal Boulevard, New Orleans, LA on Monday, January 22, 2018 at 12:00 p.m. Visitation will be held at the church from 11:00 a.m. to 12:00 p.m. Flowers are welcome as well as donations to the Parkinson’s Foundation. Arrangements by L. A. Muhleisen & Son Funeral Home.

The family of Isabelle "Isie" Katherine Eason Glenn created this Life Tributes page to make it easy to share your memories.