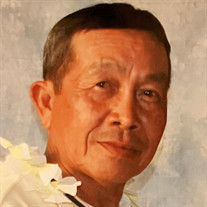 Inh Souriyavong fought a courageous battle against gastric cancer with his bright positivity until his last day, departing this lifetime January 28th, 2022 at approximately 8:00 PM, surrounded by the love and gratitude of his family at home. Inh was born May 3, 1948 in Savannakhet, Laos. He was one of nine children brought up in a farming family. In 1964 he received a B.A. in Mechanics from College d'enseignement Technique Savannakhet. In addition to Lao, he spoke fluent French and Vietnamese, and conversational English. From 1965 to 1975 he was employed by USAID 7KM (U.S. Agency for International Development) in the capital city, Vientiane, where he was the kitchen manager, translator and "American Club" bartender/film projectionist. He may have perfected his sharp style and coolness during this time, but eventually went back home to Savannakhet where he met and married his wife, Sang, in 1976. They had a healthy daughter, Chanthavanh, in Nov. 1977. While living in refugee camps, Inh worked as a translator for UNICEF in Ubon, Thailand during 1980, when his wife gave birth to their second daughter, Chanthala. Their small extended family immigrated to Oakland, CA in January 1981. They settled in New Orleans, where Inh began his public service work with the Orleans Levee District. He enjoyed the sportsman's life in the Gulf South, fishing and small game hunting, especially squirrel. Gifted in the tune of nature, Inh built large edible gardens. He loved foraging for mushrooms, bamboo and palms. In 1995, Inh took on the middle name "George" after he passed the American history test portion becoming a naturalized American citizen. He retired from public service as a supervisor after 36 years with the Orleans Levee District in 2017. Inh was proud everyday of his life to be able to provide for his family and make life-long friends along the way. He is preceded in death by his mother, Cheng Souriyavong, his father, Kheuang Souriyavong, his father-in-law, Pong Doungsy of New Orleans, his sisters, Thongheuang & Nousin Souriyavong, his brother, Bounssouan Souriyavong. He is survived by his sisters, Phoukong Malaysavanh & Thao, brothers, Sithouan Souriyavong & Khamphao Souriyavong. In the U.S. he is survived by his wife of 46 years, Sang Souriyavong of New Orleans, his daughters, Chanthavanh Souriyavong (husband, Albin Spangler) & Chanthala "Noy" Souriyavong (husband, Thomas Beeman), mother-in-law, Phieng Doungsy, niece, Marisa Xayaboupha (Nathan Xayaboupha, Aiden Clements, Abigail Clements), brother, Laokham Souriyavong (wife Khanty Borihane), brother and sister-in-law Calvin & Kim Xayaboupha, nephew, Doungpy Souriyavong, niece, Nancy Chanthanhothirat (husband Jefferey Chanthanhothirat, Ashton Chanthanhothirat, Sophia Chanthanhothirat). The Souriyavong family extends their gratitude to Dr. Jonathan Mizrahi, his colleagues and staff at Ochsner Benson Cancer Center for prolonging Inh's time with effective yet gentle treatments ensuring the integrity and quality of his life. Their care and support was a blessing. We would also like to thank Guardian Angel Hospice for their compassionate assistance in making his last weeks at home comfortable.

Inh Souriyavong fought a courageous battle against gastric cancer with his bright positivity until his last day, departing this lifetime January 28th, 2022 at approximately 8:00 PM, surrounded by the love and gratitude of his family at home.... View Obituary & Service Information

The family of Inh George Souriyavong created this Life Tributes page to make it easy to share your memories.