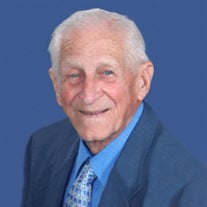 Herman Huge Triche passed away peacefully on Wednesday, November 8, 2017 at the age of 93. He was a native of New Orleans, a former resident of River Ridge and Arabi and a resident of Mandeville for the past 11 years. He proudly served his... View Obituary & Service Information

The family of Herman Huge Triche created this Life Tributes page to make it easy to share your memories.