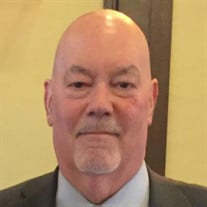 On August 6th, 2021, Herbert “Ray” Tyree Jr., loving husband and father of three, passed away at the age of 66. Ray was born on January 6th,1955 in Baltimore, Maryland to Herbert Ray Tyree Sr. and Roberta Bellew Tyree. He was an asset in the banking industry for 40 years, having graduated from Tulane University with his masters degree. On April 5th, 1986 he married Marie Celeste Gautreaux. Together they raised two sons: Christopher Ray Tyree (33) and John Hunter Tyree (30), along with one daughter: Meredith Ann Tyree (26). His family and all that knew him, saw him only as a kind, loving, smart, funny and responsible beam of light. Ray was known for his exuberant love for his family. He loved golf and loved to teach his sons how to, even more. He loved watching movies with his daughter, especially after cooking for Sunday dinners for the whole family. Along with cooking, Ray enjoyed gardening and listening to his oldies music. He thoroughly enjoyed being a “Pops” to his grandson Rivers and was anxiously awaiting the arrival of his granddaughter due later this month. Ray wanted to make everyone laugh and saw the potential in anyone. He adored his wife and was so proud of the family they created. Ray was preceded in death by his father, Herbert Ray Tyree Sr. and mother Roberta Tyree. He is survived by his wife Marie Celeste Tyree, his son Christopher Ray Tyree, wife Emily Lintinger Tyree, their son Rivers Eli Scott Tyree and their future daughter, his second son John Hunter Tyree, his daughter Meredith Ann Tyree and her fiance Nicholas Philip McCrory, his sister Diane Tyree Reger and her husband George Reger, their children Gretchen and Ben Reger, his nephew Paul Smith, his cousins Harry Morehead Jr. and Julie Davis, his mother-in-law Laura Lee Gautreaux and father-in-law the late Albert Luc Gautreaux. Relatives and friends are invited to attend a Funeral Mass at St. Charles Borromeo Catholic Church, 13396 River Rd, Destrehan, LA 70047 on Friday, August 13, 2021 at 12:00 p.m. Visitation from 10:00 a.m. to 12:00 p.m. Interment in St. Charles Borromeo Catholic Cemetery, Destrehan.

The family of Herbert Ray Tyree Jr created this Life Tributes page to make it easy to share your memories.