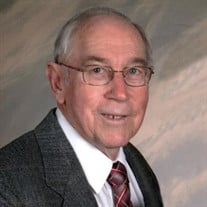 Harry Louis Landry passed away on Wednesday, November 17, 2021 at the age of 95. He was a native of Klotzville (Belle Rose), LA and a resident of River Ridge, LA. He practiced Physical Therapy at Touro Infirmary for 41 years beginning in 1953 after graduating in the first Physical Therapy class offered by Charity Hospital in New Orleans. For much of his career he was Chief Physical Therapist, managing the department and personally treating dozens of patients daily. He often saw patients in their homes after hours when they needed treatment. Later in his career he specialized in the rehabilitation of burn injury patients. In 1994, he was a finalist for the Rosen Award for Excellence. After moving to New Orleans to pursue his career in the early 1950's, he met the love of his life, Joan Daigle and they were married in the city in 1955. They bought a starter home in Little Farms before settling in River Ridge to raise two sons. In his free time he was a passionate vegetable gardener and homebody. With the encouragement of his wife, they traveled the US and abroad after retirement. On weekends he enjoyed cheering on his LSU Tigers and NO Saints. He was raised on a farm along Bayou Lafourche where he enjoyed raising cattle with his family. He enlisted in the Army Air Corps in 1945 and was an early member of the Allied Occupation of Germany. After serving his country he enrolled at LSU on the GI Bill studying Education and Math. He was the first in his family to attend and graduate from college. While at LSU he was a trainer for the boxing and track teams which sparked his interest in sports medicine. After teaching middle school briefly, he pursued his career in Physical Therapy. He was a devout Roman Catholic, a member of the St Matthew Ushers Society and Treasurer of the St Jude Society for many years. He spent his life serving others. He never met a stranger and was always there with a helping hand. He was a gentle, soft-spoken man beloved by all who knew him. Devoted husband of 66 years to Joan Ann Daigle Landry. Loving father of Mark D. Landry (Roberta), and the late Steven G. Landry (Rita R). Grandfather of Ashly Patterson, Katie Landry-Guyton (John) and Katie Mastio (Paul). Great Grandfather of Skylar Rains, Eleanor and Steven Guyton, and Helaina, Connor and Wyatt Lacoste. He was preceded in death by his parents, Raoul Exavier Landry and Eva Josephine Martinez Landry and his brothers, Artus Landry and Linwood Landry (Penny). He is also survived by many nieces and nephews. The family would like to thank and acknowledge the staff of The Blake at Colonial Club Assisted Living (Harahan), the staff of St Francis Villa Assisted Living (River Ridge), and Guardian Angels Hospice (Little Farms). A special thanks to Ms Troy Rosales for her dedicated and loving service to Mr. Harry. Relatives and friends are invited to attend the Funeral Service at St. Matthew the Apostle Catholic Church, 10021 Jefferson Hwy, River Ridge, LA on Tuesday, November 23, 2021. Visitation will be held from 10:30 a.m. until 12:00 p.m. with the Funeral Mass to immediately follow at 12:00 p.m. Interment in Jefferson Memorial Gardens, 11316 River Rd, St. Rose, LA. Donations can be made to Touro Infirmary’s Rosen Award as a Tribute Gift in the name of Harry L. Landry, https://www.touro.com/foundation/ways-to-give/online-donation/ Arrangements by L. A. Muhleisen & Son Funeral Home. To share memories or condolences, please visit www.muhleisen.com

Harry Louis Landry passed away on Wednesday, November 17, 2021 at the age of 95. He was a native of Klotzville (Belle Rose), LA and a resident of River Ridge, LA. He practiced Physical Therapy at Touro Infirmary for 41 years beginning in 1953... View Obituary & Service Information

The family of Harry Louis Landry created this Life Tributes page to make it easy to share your memories.