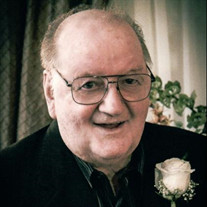 Harold E. “Mac” McConnell passed away peacefully on Friday, March 1, 2019 with his loving wife, Fay Stetler McConnell, of 32 years by his side. He was 89, a native of New Orleans and resident of Kenner. He was preceded in death by his parents, William McConnell and Thelma Reynolds McConnell and his brother, Arthur “A.J.” McConnell. He is survived by his loving wife, Fay Stetler McConnell; children; Bruce McConnell, Steve McConnell (Debbie), Duke McConnell (Sissy), and Jean McConnell Thevenot (Terry); stepchildren, Diana Stetler Seely (Buddy), Donald Stetler (Lisa), Sandy Stetler Wahl (Daniel); sister, Linda Musacchia (Geray); brother, Wayne McConnell (Ethel); grandchildren, Patricia Hughes, Brent McConnell, Eric Davis, Sara McConnell, Rachel Scott, Todd McConnell, Erika McConnell, Kelly Raines, Toby Thevenot, and Tory Reech; step-grandchildren, Harold Rider (Shelley), Eric Aponte (Tonya), MaryAnne Natale (Chris), Christina Petrovski (Dimitar), Courtney McDonald (Kyle), Laura Lynn Meiser (Brad), Theresa Wahl and Danny “D3" Wahl; 16 great-grandchildren; 15 great step-grandchildren; and many nieces and nephews. He graduated in 1947 from Peters High School and was retired from Western Electric. Mac loved to play baseball and played until he was about 70 years old. You called and he would play. He played for Western Electric, Gentilly Knights of Columbus and many other leagues. He was inducted into Commercial Athletics Association in 1974 Baseball Hall of Fame. Mac watched all sports, but especially the college games. One of his biggest loves was for Tulane University Sports. Especially following Tulane Baseball Teams each year. He kept the box scores on all of the games. Many Tulane baseball players would remember him as “Mr. Mac”. Mac was a part of the first All American Team that went to Johnstown, PA every year. Many trophies were won throughout his life. Although Mac really loved college games the New Orleans Saints were right up there in his loves. He was a season ticket holder for over 30 years. As he aged he took up Golf. He will be sadly missed by all who knew him. Mrs. Fay McConnell would like to acknowledge the kindness, compassion and support received from his care givers with R & R Home Care for 10 years, Dawn Bender RN, Kelly Abbuplon LPN, Karen Lee and Camelia; Hospice nurse, Stephanie; and also for the care at Passages Hospice Hospital, which had a caring staff and beautiful facility. Thank you to our wonderful good friends and neighbors for being there for both of us and The Vineyard Church of New Orleans, Kenner. Thank you God for giving him peace in death. Relatives and friends are invited to attend the visitation at L. A. Muhleisen & Son Funeral Home, 2607 Williams Blvd., Kenner on Friday, March 15, 2019 from 9:00 a.m. to 11:00 a.m. with a Memorial Service beginning at 11:00 a.m. A celebration of life gathering will follow at the Funeral Home until 1:00 p.m. Inurnment in Garden of Memories Cemetery.

Harold E. &#8220;Mac&#8221; McConnell passed away peacefully on Friday, March 1, 2019 with his loving wife, Fay Stetler McConnell, of 32 years by his side. He was 89, a native of New Orleans and resident of Kenner. He was preceded in death... View Obituary & Service Information

The family of Harold E. "Mac" McConnell created this Life Tributes page to make it easy to share your memories.