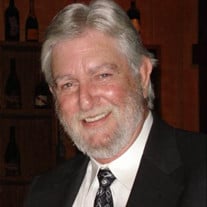 Gerald Thomas “Bec” Becnel, Sr. passed away on Tuesday, October 22, 2019 at the age of 77. He was a native of New Orleans, LA and a resident of Kenner, LA. Beloved husband of Joann Ferrera Becnel. Father of Gerald T. “Jerry” Becnel, Jr. (Donna) and Danna B. Morris (Mason). Grandfather of Samantha Becnel and Savannah Becnel. Son of the late Anna “Ethel” Bautsch Becnel and Joseph Roy Becnel, Sr. Brother of the late Joseph Skip Becnel, Jr. Also survived by many nieces and nephews. After long months of fighting cancer our beloved husband, father and grandfather began his final journey the night of October 22nd. A good man with a heart of gold, Jerry’s acts of generosity directed at a friend or stranger in need were many, but never did he ask for or expect anything in return. The “Bec” was a man of simple taste. While so very handsome in a suit or tux, he was happiest in his Levi’s, a tee-shirt and Nikes. Jerry was many things throughout his life and always gave his all whether he was on the job, in his workshop or at play. He was an all-state track star in the triple jump, a volunteer coach and a founding member of the Men’s Club at Butch Duhe playground, a self-taught “green thumb”, a great bowler, dart player, chess player, fisherman, golfer, a crossword puzzle lover, a true animal lover (all animals LOVED him), a handy man, a staunch Tulane fan, and a “free spirit” who loved his long hair, his Harley, playing a mean air guitar while he washed his car, and he especially loved retirement. Jerry worked most of his life at National / Pan Am Airlines and finished his career with the Kenner Police Department. He truly loved both jobs, cherished his work families, and valued the lifelong friendships that developed. Most of all, he admired, respected, and was so proud of all the men and women in blue. If you know the Bec, you know he kept a “list", and you didn’t want to be on it. It was started to “blackball” restaurants but quickly grew to include a wide array of people, places and things. Getting on the list was pretty easy, no lettuce & tomato salad or Miller Lite, ouch – you made the list! On a lighter note, the Bec was an avid TRUMP...MAKE AMERICA GREAT AGAIN supporter, and a devoted FOX News Network fan watching it all day long. Our family apologizes for any opinions which may have offended you in some way. Note: The Bec would NOT want us to apologize and there will be hell to pay once he realizes what we have done. Most of all Jerry truly loved his family and was so proud to call them his own. Danna and Jerry, Jr. often argued as to who was no. 1 in his pecking order while Mason and Donna rolled their eyes, but from the day his granddaughters (Samantha and Savannah) were born they took the top spot. Jerry started Grandpaw / Grammie “GG” Wednesdays when the girls were toddlers letting them choose any activity for the day. He really loved GG Wednesday which never ended and lives on to this day. Truth be told, while Jerry never wanted many things, he needed only one; his beloved bride JoAnn. Jerry’s life centered around JoAnn and the beauty that was his life blossomed from there. The family would like to thank Hospice Associates and nurse Andria Schiro for their compassionate care during Jerry’s last days. Relatives and friends are invited to attend the visitation at L. A. Muhleisen & Son Funeral Home, 2607 Williams Blvd., Kenner on Thursday, October 31, 2019 from 10:00 a.m. to 12:00 p.m. followed by a Memorial Mass at 12:00 p.m. In lieu of flowers, the family asks you consider making a donation in Jerry’s name to the Kenner Police Benevolent Association, 500 Veterans Blvd., Kenner, LA 70062 or your favorite charitable organization. To share memories or condolences, please visit www.muhleisen.com

The family of Gerald Thomas "Bec" Becnel, Sr. created this Life Tributes page to make it easy to share your memories.