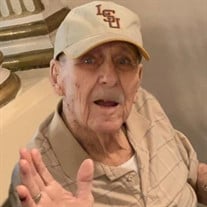 George Adam Binet passed away on Wednesday, March 11, 2020 at the age of 91. He was a native of New Orleans, LA and a resident of Metairie, LA. Beloved husband of the late Catherine Penton Binet and the late Judy Wedge Binet. Father of George “Al” Binet and Jackie Jackson (Ben). Stepfather of Paul Edward Senac (Rachel). Son of the late Albert Binet and Leocadie Dominigue Binet. Brother of Claire “Clara” Binet Creppel and the late Morgan Edward Binet, Sister Mary Tranquilla, Nolarean Ragusa and Joseph Binet. Also survived by many nieces and nephews. Mr. Binet proudly served our nation in the U.S. Marine Corps and the U.S. Army. He was a longtime cab driver with United Cabs and Metry Cabs. His love for books and reading was obvious in his home. There was no surface without stacks of them. His offer to "take a book if you like" was standard. Though he didn't obtain a formal university degree, two of his sisters profited from his extraordinary intellect, generosity, and mental skills in obtaining theirs. He was also a longtime fan of all LSU sports, as well as, the New Orleans Saints and was seldom without said cap or shirt. A sportswriter for the New York Times once recalled after being a passenger in George's cab, and wrote on September 29, 1993 in a New York Times article about the Saints: "No sooner had he pulled his cab out of the parking lot of the Saints' training facility than George Binet started recounting bits of New Orleans Saints lore. He began with long forgotten names: "Billy Kilmer, you remember him don't you?" he asked. “And that boy, Tom Fears, he was the first coach. Big Doug Atkins, think he's a prison guard somewhere up in Tennessee." Binet described himself as a big Saints fan, but said his wife, Judy, "is a Saints nut." "She's got every card for every quarterback the Saints ever had," he said. “The Binets are like many other New Orleans Saints fans who have suffered through a heart-wrenching 26-year relationship with the Saints." That fact made the Saints Super Bowl championship that much more satisfying for George Binet. Relatives and friends are invited to attend the Visitation and Memorial Mass at L. A. Muhleisen & Son Funeral Home, 2607 Williams Blvd., Kenner on Saturday, June 12, 2021. Visitation from 9:00 a.m. to 11:00 a.m. followed by a Memorial Mass at 11:00 a.m. To share memories or condolences, please visit www.muhleisen.com

George Adam Binet passed away on Wednesday, March 11, 2020 at the age of 91. He was a native of New Orleans, LA and a resident of Metairie, LA. Beloved husband of the late Catherine Penton Binet and the late Judy Wedge Binet. Father of George... View Obituary & Service Information

The family of George Adam Binet created this Life Tributes page to make it easy to share your memories.