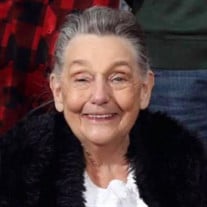 Gail “Diane” Nadine Harker (neè Patrick), 84, of Columbus, OH and Houma, LA made her journey to heaven on March 23, 2021, where she was reunited with her loving husband, Floyd Harker. Diane was born January 6, 1937 in Chicago IL to John and Esther (Bork) neè Patrick, along with her siblings John, Linda, Jack, David, Michael, and Ricky. Diane was married to Floyd Harker on September 30, 1959; they raised four sons, Gary, Andy, Shawn, and Steven. Diane worked in the restaurant industry (Tee Jaye’s) for over 40 years and during that time she never met a stranger. She was an active member of her church, loved reading, cooking, gardening, playing cards, traveling, and above all else, spending time with her family. Many wonderful memories were created with her family on what some might call “crazy family vacations” and she held these memories very dear. Diane’s love for her family cannot be described; It was a love that was fierce, unconditional, and never ending. She made everyone she knew a part of this family and came to be known as Grandma by many. Diane held the titles of mom, grandma, and great grandma with great pride and was always proud of those who knew her as such. To call her “World’s Best Grandma” would be nothing short of accurate; you could often find her baking a birthday cake, telling tales (although some were terrifying), doing crafts, making magic soup, or playing games. Diane was also known for her endless compassion, quick wit, and kind caring spirit. She held a strong belief in God and knew that after this life was over, she would return home. Diane is preceded in death by her husband Floyd; mother Esther; father John; sister Linda; mother-in-law Zelma Harker; father-in-law Vern Harker; and sisters-in-law Velma and Sandy. She is survived by her four children Gary, Andy, Shawn, and Steven; daughters-in-law Kathy, Sharon, Helen, Joan, Michelle; in-laws Connie, Ginny (Danny), James (Diane), and Ronell; grandchildren Corrin, Becky, Johnny, Susie (Paul), Kaylin, Chris (Karen), Brandon (Lauren), Mike, Katie, Elijah, Steven Jr., Angela, Elaina, Jordan (Hunter), Morgan (Jamie), Sarah, Savannah, Shayne, Seth, Joey, Nick, Jordan (Chris), Josh, and Taylor; and great grandchildren Chrissy, Nikki, Will, Gio, Penny, Sebastian, Rosie, Jax, Lyric, Maverick, Lydia, Jillian, Sophia, and Jordan. A special thanks to Dr. James Soignet, Ochsner Neuro ICU, Lori, Lauren, and Johnny of Thibodaux Home Health. A celebration of life will be held at Life Church, 2324 Coteau Road, Houma, LA 70364 on Saturday, April 10, 2021 at 4:00 p.m. The celebration in Columbus, Ohio will be held at Grace Point Sanctuary, 3950 Summit View, Dublin, OH 43016 on Saturday, April 24, 2021 at 2:00 p.m. To share memories or condolences, please visit www.muhleisen.com

The family of Gail "Diane" Nadine Harker created this Life Tributes page to make it easy to share your memories.