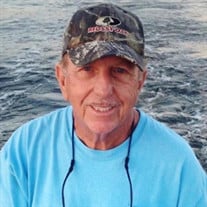 Frederick Charles Hauck, born October 26, 1938, took off for a new adventure on Friday evening, May 1, 2020 at the age of 81. He was a native of New Orleans, LA, and a resident of Saint Rose, LA. Beloved husband of Gloria G. (Tschetter) Hauck. Father of Melissa S. Hauck, Kristina L. Hauck, and Aaron C. Hauck. Grandfather of Brianna G. Hauck. Son of the late Edward H. Hauck Sr. and Elvin M. (Caruso) Hauck. Stepson of the late August J. Ciccio and Anne M. (Laborde) Hauck. Brother of Larry A. Hauck and the late Audrey M. (Hauck) Barrios, Elvin "Pat" L. (Hauck) Ohler, Edward "Junior" H. Hauck Jr., Delores Hauck, Stanley "Sam" J. Hauck, and Sylvia Hauck. Also survived by many nieces and nephews. Fred was born into a family of musicians, shopkeepers, restaurant owners, fishermen, and seafood sellers. He grew up in the 1940's, fishing, riding his pony, and teaching New Orleans' tourists how to eat blue crabs at his mother's restaurant, Evelyn's Restaurant, on Hayne Blvd. The restaurant was built from the ground up by his family, and also served as the family kitchen. As a young adult, he worked over 25 years on the Mississippi River as an exceptionally talented crane operator and longshoreman. In the spring of 1962, he was drafted into the army and served two years as a textile repairman, during which time he did a bit of parachuting and plane flying. During his life, he also worked at the fairgrounds, as a commercial fisherman, bar owner, seafood seller, lock maker, courier business owner, and did extra/stunt work for movies. He was never afraid of hard work, always showed up an hour early, and was a man of integrity, ethics, and honesty. Between these years of work, he serendipitously stumbled into his most cherished roles of husband and father when he met the love of his life, Gloria, on the Lido deck of a Carnival Cruise in June of 1980. After several months of letters, phone calls, and a few visits, they married on December 20, 1980. His favorite place was on the water in his boat, or pedaling out his kayak with a fishing pole or crab nets in hand. He loved singing old country karaoke with friends, bike riding, betting the race horses, and day trips to the Mississippi coast with his Gloria. He deeply loved having his family gathered together, entertaining friends and family over his homemade gumbo, singing, storytelling, and laughter. He loved and cared for others, gave generously, and always showed kindness and compassion. The best of him will continue to live on through his wife, children, granddaughter, and the lives of those he has touched. Cremation by L.A. Muhleisen & Son Funeral Home. A celebration of life will be planned at a later date. Please consider sharing your thoughts, favorite memory, or condolences at www.muhleisen.com

Frederick Charles Hauck, born October 26, 1938, took off for a new adventure on Friday evening, May 1, 2020 at the age of 81. He was a native of New Orleans, LA, and a resident of Saint Rose, LA. Beloved husband of Gloria G. (Tschetter) Hauck.... View Obituary & Service Information

The family of Frederick Charles Hauck created this Life Tributes page to make it easy to share your memories.