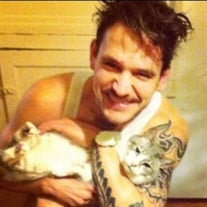 Franklin James Russell passed away on Friday, April 2, 2021 at the age of 42. He was born in camp Lejeune, NC spent his first 5 years of life living in Mission Viejo, CA before moving to Jackson, MI where he spent most of his childhood. Frank was a resident of New Orleans, LA at the time of his passing. Frank attended Michigan Center and East Jackson Schools in Michigan, obtained his GED in Lansing, MI. Frank received his Undergraduate from Portland State University in 2015;a B.A. in French language and Literature-he studied abroad in Lyon, France. He was enrolled in the MSW program at Southern University of New Orleans at his time of death. Frank had a brilliant mind and was an avid Reader, Writer and Poet. He practiced Nichiren Buddhism. Preceded in death by Grandparent Charles and Angela Colligan, Grandmother Roslyn Cheney, Aunt Mary Shull and stepmother Valarie Russell. Survived by Grandfather George Russell, Mother Rose Ferels, Siblings Samantha, Emalee and Michael Russell, Nieces Nevaeh, Zarriah and Annie Jayne, Nephew Cassius, numerous Aunts, Uncles and Cousins and friends all over the world. Frank was a free spirit, a traveler and lover of people. He loved the city life and moved from small town Michigan to New Orleans with the clothes on his back at the tender age of 19.It was shortly after he met his life partner Lee Haywood. Frank spent many years in Portland, OR where his sister Emalee was able to join him and still resides. He made many lifelong friendships while there. Frank was a proud and loving Uncle to his nieces and Nephew. He was a loving son and the best big brother and protector to his siblings providing a safe space for his sisters has "always been enough" and always will be. Franks been the subject of a documentary, had poetry published in articles and has a part in a movie to be released this year. He worked in the service industry as a Nurses Aide, Bar Tender/Mgr. and pedicabbed in the French Quarter. Frank was vocal at a young age about human rights and equality for many minority groups including the LGBT community and Black Lives Matter, he was a Philanthropist, Humanitarian and activist. He was deeply involved in Recovery Programs and a pivotal member of the Amputee Community. He was loved beyond measure by people all over the world. Frank shined his light on the world for only 42 years, but what he leaves behind is everlasting. Per Frank's wishes cremation has taken place. A second line will be held in New Orleans date to be announced. A memorial in Michigan will take place May 29th. Arrangements by L. A. Muhleisen & Son Funeral Home. Please consider sharing your thoughts, favorite memory or condolences at www.muhleisen.com

Franklin James Russell passed away on Friday, April 2, 2021 at the age of 42. He was born in camp Lejeune, NC spent his first 5 years of life living in Mission Viejo, CA before moving to Jackson, MI where he spent most of his childhood. Frank... View Obituary & Service Information

The family of Franklin James Russell created this Life Tributes page to make it easy to share your memories.