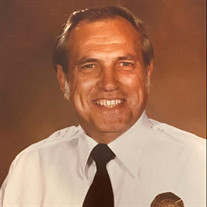 Francis Leroy “Frank” Fatherree passed away on Thursday, February 24, 2022 at the age of 84. He was a native of Bourg, LA and a resident of Kenner, LA. Beloved husband of Jeraldine "Jerrie" Fatherree. Loving father of Dwayne Jay Fatherree (Sarah Spell), Donna Jo Durel (Charlie), Debbie Lynn Kennedy (Darren) and Diane Lee Fatherree. Grandfather of Alec Laurence Fatherree, Zed Fatherree, Samantha Paige Fatherree, Dara Frances Kennedy, Charles “Chase” Durel III and Ella Lynn Durel. Frank moved to New Orleans at the age of 14 to attend Warren Easton High School, then enlisted in the Louisiana Army National Guard as a surgical technician. It was while training at Walter Reed Medical Center in Bethesda, MD that he met Jeraldine. After a blind date, he stood outside the apartment where she lived with her sister until she would give him her phone number. She finally agreed. Following his military service, the couple moved to Kenner, where Frank worked at several jobs before securing a position with the New Orleans Fire Department, where he rose to the rank of captain during his 27-year career. Following his retirement, he and Jerrie opened an antique shop which operated in various locations for almost 20 years. He was bitten by the tennis bug in the early 1970s. He competed regularly in local leagues. He came in second in the New Orleans city employee's tennis tournament, losing in the final to then-Mayor Maurice "Moon" Landrieu. What he is probably best remembered for, however, is his love of horse racing and casinos. He was an avid card player, spending many Friday nights at Westgate Country Club playing bourré until the wee hours of the morning. He was also well known at the Fair Grounds and Jefferson Downs race tracks, where he would sit in on card games with trainers and jockeys. He also enjoyed watching sports at home, relaxing with Lulu, a dachshund who Frank and Jerrie adopted as their "fifth child." Relatives and friends are invited to share their memories of Frank at a Visitation and Funeral Service at L. A. Muhleisen & Son Funeral Home, 2607 Williams Blvd., Kenner on Friday, March 4, 2022. Visitation from 11:00 a.m. to 1:00 p.m. followed by a Funeral Service at 1:00 p.m. Interment in Jefferson Memorial Gardens Cemetery, St. Rose, LA. To share memories or condolences, please visit www.muhleisen.com.

Francis Leroy &#8220;Frank&#8221; Fatherree passed away on Thursday, February 24, 2022 at the age of 84. He was a native of Bourg, LA and a resident of Kenner, LA. Beloved husband of Jeraldine "Jerrie" Fatherree. Loving father of Dwayne Jay... View Obituary & Service Information

The family of Francis "Frank" Fatherree created this Life Tributes page to make it easy to share your memories.