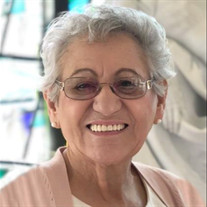 Esperanza Muñiz Ramos passed away surrounded by her loved ones on Wednesday, June 12, 2019 at the age of 76. She was a native of Ponce, Puerto Rico and a resident of Kenner, Louisiana. A lifelong learner, Esperanza’s formal education in Puerto Rico culminated with her degree from the Universidad Católica de Puerto Rico in Ponce, Puerto Rico. After moving to the epicenter of the Puerto Rican diaspora, the Bronx, New York, in 1963, she received her B.A. degree from Long Island University in 1969, followed by a Masters in Education from Tulane University, in New Orleans, LA, her home city since 1974. A pioneer in ESL, English as a Second Language, and Bilingual instruction, her teaching career began at P.S. 51 in the Bronx, New York and she was later Certified by the Louisiana Department of Education in 1975. Esperanza was a teacher in the Jefferson Parish Public School System for 30 years and taught at Roosevelt Middle School, Bonnabel High School, and J.C. Ellis Elementary, before retiring in 2006. Esperanza had a passion for teaching and lived a dedicated life of service to others. She was an active Parishioner of St. Jerome Catholic Church for 45 years, serving as a member of the Eucharistic Ministry and the Grupo Carismático. For over three decades, she had a profound and lasting impact on countless members of the Spanish-speaking immigrant community by volunteer teaching preparatory classes for the U.S. citizenship test and interview. In that regard, she also served as a volunteer translator and interpreter before the U.S. Citizenship and Immigration Services. Among the various honors she has received over her lifetime, she was awarded by the Archdiocese of New Orleans the Order of St. Louis the IX Medallion, an honor bestowed to those who have devoted themselves to the work of the Catholic Church. The Archdiocese of New Orleans also honored Esperanza and her husband, Angel, with a Golden Wedding Anniversary Celebration prayer service, recognizing couples that have been married for over fifty years. Beloved wife of Angel Agusto Ramos. Loving mother of Selma Rita Ramos English (Reginald James English) and Pilar Suyapa Ramos (Kaihan Pascal Krippendorff). Cherished grandmother of Andrés Ernesto Acosta, Sofia Helena English, Lucas Somar Krippendorff, Kaira Maya Krippendorff and Makar Santos Krippendorff. Devoted daughter of the late Juana Pérez Arroyo and Antonio Muñiz Figueroa. Exemplary sister of Antonio Muñiz Pérez, Juanita Muñiz Pérez (Vda. de Ramos), Jorge Muñiz Pérez, Edwin Muñiz Pérez, Marta Ivette Muñiz Pérez and Milagros Muñiz Pérez. Also survived by aunts, uncles, dozens of nieces and nephews, and several godchildren. Relatives and friends are invited to attend the visitation at L. A. Muhleisen & Son Funeral Home, 2607 Williams Blvd., Kenner on Monday, June 17, 2019 from 6:00 p.m. to 9:00 p.m. and on Tuesday, June 18, 2019 at St. Jerome Catholic Church, 2402 33rd St., Kenner from 9:00 a.m. to 11:00 a.m. followed by a Funeral Mass at 11:00 a.m. Interment in St. Patrick Cemetery No. 3, New Orleans. Please share memories or condolences at www.muhleisen.com. In lieu of flowers, donations can be made on her behalf to St. Jerome Catholic Church in Kenner, LA, or to Stand Up To Cancer at: https://secure.eifoundation.org/site/SPageServer?pagename=su2c_donate.

Esperanza Muñiz Ramos passed away surrounded by her loved ones on Wednesday, June 12, 2019 at the age of 76. She was a native of Ponce, Puerto Rico and a resident of Kenner, Louisiana. A lifelong learner, Esperanza&#8217;s formal education in... View Obituary & Service Information

The family of Esperanza Muñiz Ramos created this Life Tributes page to make it easy to share your memories.

Esperanza Mu&#241;iz Ramos passed away surrounded by her loved ones...