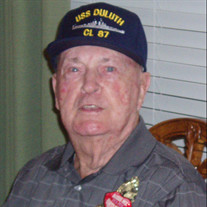 Ernest J. Dufrene, Sr. (Enos) passed away on August 28, 2017 at the age of 95. He was born on September 13, 1921 in Raceland, Louisiana to the late Toussaint Pierre Dufrene and Cecile Parks Dufrene. He was a resident of New Orleans/Metairie for 73 years followed by 7 years in Houston/Cypress, Texas. Ernest was the beloved husband of Anna Vicknair Dufrene for 61 years and is survived by his sister Virley D. Reeves, daughter June D. Junot (DJ), son Ernest(Ernie) J. Dufrene, Jr. (Rosetta), and daughter Kathy D. Boeckelmann (Michael). He is proudly survived by his 7 grandchildren, 16 great grandchildren, and 11 great-great grandchildren. Ernest is preceded in death by his parents, siblings Leonce T. Dufrene, Glaze D. Chauvin, Whitney J. Dufrene, Mae D. Toups, Lester P. Dufrene, Myrtle D. Hoffman, Norris J. Dufrene and wife Thelma Courtade (16 yrs). Ernest retired with New Orleans Public Service (RTA) after 37 years as a bus operator and was well known and respected on his long tendered Galvez route. He owned and drove (part time) Metry Cab #7 until turning it over to his son Ernie. Prior Ernest served in the National Guard and the US Navy in WWII on the USS Duluth. He was also a member of the Pontchartrain Lions Club, VFW Metairie Post 6640 and VFW Harahan Post 3267. Ernest loved his family, crawfish boils, crabbing and fishing. He was a mentor to his children and grandchildren for everything from work to simply passing a good time. The family would like to thank Hospice with Grace and Heartis Cypress for their loving care. Relatives and friends are invited to attend the celebration of life at L. A. Muhleisen & Son Funeral Home, 2607 Williams Blvd., Kenner on Friday, September 8, 2017. Visitation will be held from 8:30 a.m. to 10:30 a.m. and the Funeral Mass to immediately follow at 10:30 a.m.

Ernest J. Dufrene, Sr. (Enos) passed away on August 28, 2017 at the age of 95. He was born on September 13, 1921 in Raceland, Louisiana to the late Toussaint Pierre Dufrene and Cecile Parks Dufrene. He was a resident of New Orleans/Metairie... View Obituary & Service Information

The family of Ernest Joseph Dufrene, Sr. created this Life Tributes page to make it easy to share your memories.